Wolves don't concern themselves with the opinions of sheep.

Context:
Los Angeles Ram slot cornerback Robey-Coleman said after receiving negative comments, including death threats, when a controversial play he was involved with led to his team beating the New Orleans Saints in overtime. The Rams will play the New England Patriots in Super Bowl 53 in Atlanta, as a result of the win. 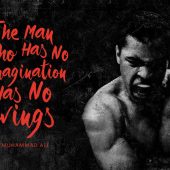