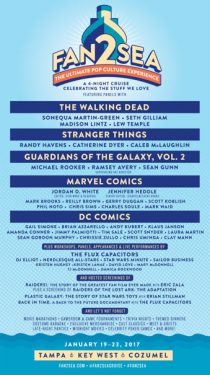 Fan2Sea has announced the full lineup of guests, entertainment and activities for its maiden voyage aboard the Royal Caribbean’s Brilliance of the Seas, which sets sail from January 19–23, 2017 out of Tampa, Florida, with stops in Key West and Cozumel, Mexico. The pop culture-themed cruise will feature panels, nightly parties, movie marathons, themed dinners and intimate meet and greets with creators, artists and entertainers.

While there have been pop culture-themed cruises in the past (Lash Con Cruises produces very specific fandom cruises, including events for Sons of Anarchy fans and gaming fans, and Wizard World has attempted to mount a Comic Con Cruise as well), this could be a watershed moment for the Comic Con Convention industry. What a cruise does is bring an entirely new kind of fan out for a convention. Fans that aren’t necessarily looking for autographs and celebrity worship, but love the movies and television shows that they appear in. That segment could find a cruise a great way to experience fandom, while enjoying activities they normally do on vacations. While I love attending and covering Comic Cons, other than New York Comic Con and San Diego Comic Con, they’re confined to the buildings in which they’re happening and that can get monotonous over a 3-5 day period, no matter what the programming features.

The other interesting aspect of having a cruise is, there is a limit to how many people can board a ship. That should alleviate the monster crowds that tend to inhabit the Saturday of most Cons. Once everyone’s on board, that’s it, no one going to grab a fishing boat and mob the place on Saturday for a chance to see their favorite celebrity at a panel.

Another obvious benefit is that the built-in infrastructure of a convention center simply can’t match what’s available on most large cruise ships. Having so many options within the environment you’re already paid for, can be another great attraction for travel/pop culture lovers. As I said, this opens the door to fans who don’t necessarily want to do all the things traditional Cons have to offer.

However, Fan2Sea will be offering a number of traditional Comic Con activities. For one, the event will celebrate AMC’s The Walking Dead with a panel featuring series favorites Sonequa Martin-Green, Seth Gilliam, Madison Lintz and Lew Temple. There will also be a Guardians of the Galaxy Volume 2 panel featuring Michael Rooker (Yondu), Sean Gunn (Kraglin) and Ramsey Avery, the Supervising Art Director for the upcoming sequel.

Stranger Things on Netflix has emerged as the TV hit of the summer, and Fan2Sea will be bringing them along for its maiden voyage. Series stars Randy Havens, Catherine Dyer and Caleb McLaughlin, plus members of the creative team yet to be announced, will be on stage to discuss the making of the acclaimed program.

The entertainment continues with live performances and sets by 1980s cover band The Flux Capacitors, nerd-centric DJ Elliot, and the Nerdlesque All-Stars burlesque troupe. Also appearing on board will be the Star Wars Minute podcast (Alex Robinson and Pete the Retailer), which celebrates the Star Wars movies one minute at a time.

In addition, Fan2Sea will be running a documentary series, starting with a double feature of Raiders: The Story of the Greatest Fan Film Ever Made and Raiders of the Lost Ark: The Adaptation, hosted by Eric Zala, director of the latter. Director Brian Stillman will show his film about the history of Star Wars toys, Plastic Galaxy. The Flux Capacitators will also host a screening of Back in Time, about the enduring legacy of the Back to the Future film franchise.

Royal Caribbean’s Brilliance of the Seas is a Radiance-class ship, with state-of-the-art facilities, including gourmet restaurants, bars and lounges, a rock climbing wall, outdoor miniature golf, a spa, casino and more.

Find out more about Fan2Sea at our Go-phile entry about the event Here.