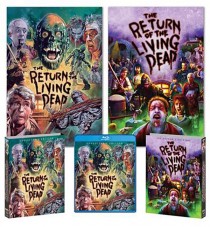 Filmmaker Dan O’Bannon (Alien, Lifeforce) puts an uproarious spin on the zombie apocalypse movie in 1985’s cult classic The Return of the Living Dead, starring Clu Gulager (A Nightmare on Elm Street 2: Freddy’s Revenge), James Karen (Mulholland Drive) and Don Calfa (Weekend at Bernie’s). Considered one of the campiest undead romps of its time, the film helped launch the career of scream queen Linnea Quigley (Night of the Demons, Sorority Babes in the Slimeball Bowl-O-Rama) and features a killer soundtrack with tracks from many songs from punk artists such as The Cramps, T.S.O.L. SSQ and 45 Grave. On July 19, 2016, SCREAM FACTORY™ is proud to present The Return of the Living Dead Collector’s Edition Blu-ray set, which includes a brand new 2K scan of the film and over 12 hours of extras!

This definitive set includes a collectible slipcover featuring newly rendered artwork and a reversible cover wrap featuring original theatrical key art. A must-have for movie collectors, zombie horror enthusiasts and loyal fans, The Return of the Living Dead Collector’s Edition Blu-ray is available for pre-order now at ShoutFactory.com and will be made available to other fine retailers.

Special Features for this release include:

Avid fans of the film will want to take note of two exclusive offers on the release, which are only available at shoutfactory.com while supplies last.

The “Standard Offer” will net you a limited-edition 18” x 24” poster of the newly-designed art from artist Graham Humphries. Your order will also be shipped two weeks earlier than the release date of July 19th.

A second “Deluxe Offer” is limited to 1,000 orders and features: a limited-edition 18” x 24” poster of the newly-designed art from artist Graham Humphries; a second 18” x 24” poster of the newly designed art from Joel Robinson; a second slipcover made exclusively for this promotion and newly-designed from artist Joel Robinson; plus your order will also be shipped three weeks earlier than the July 19th release date.

Just when you thought it was safe to go back to the cemetery, those brain-eating zombies are back and hungry for more tasty mortals. A fiendish mix of outrageous humor and heart-stopping terror, The Return of the Living Dead is a veritable smorgasbord of fun (LA Herald-Examiner) filled with skin-crawling jolts, eye-popping visuals and relentless surprise! On his first day on the job at an army surplus store, poor Freddy unwittingly releases nerve gas from a secret U.S. military canister, unleashing an unbelievable terror. The gas re-animates an army of corpses, who arise from their graves with a ravenous hunger for human brains. And luckily for those carnivorous cadavers, there is a group of partying teens nearby, just waiting to be eaten.

Let’s get the party started. Below is the original trailer for The Return of the Living Dead.