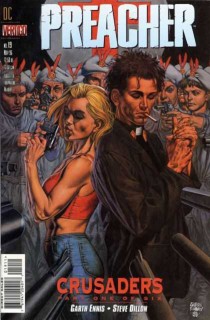 AMC has ordered a pilot for the DC Vertigo-published comic Preacher, Variety reports. Seth Rogen and Evan Goldberg wrote the adaptation for Neal Moritz’s Original Film and the trio will produce the project along with showrunner Sam Catlin, according to the report.

Preacher will be based on Garth Ennis and Steve Dillon’s 1990s comic book series, centered on Jesse Custer, a preacher in a Texas town who merges with a creature that has escaped from heaven and develops the ability to make anyone do anything he says. Along with his ex-girlfriend, Tulip, and an Irish vampire named Cassidy, the three embark on a journey to find God.

The pilot will be produced in the summer of 2015 for series consideration in 2016.