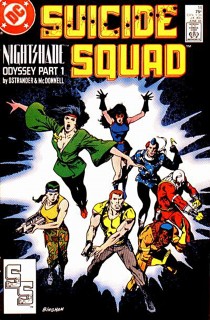 Suicide Squad, which hits theaters on August 5, 2016, is based on the DC comic of the same name, centering on a team of bad guys and gals who are given a chance at redemption by the government. The catch is that their mission will probably be fatal for them all.

The official cast and character list includes: Jared Leto as The Joker; Will Smith as Deadshot; Tom Hardy as Rick Flagg; Margot Robbie as Harley Quinn; Jai Courtney as Boomerang; and Cara Delevinge as Enchantress.

According to the report, Suicide Squad begins shooting next April in Toronto, directed by David Ayer and produced by Charles Roven. Jesse Eisenberg is also in talks to play Lex Luthor in the film, a role he will first play in next years’ Batman v Superman: Dawn of Justice, though his participation in Suicide Squad has not yet been confirmed.

Warners still has the role of Amanda Waller, the character who oversees the team, to cast before the film goes into production. The studio’s short list of actresses being eyed for the role includes Viola Davis, Octavia Spencer and Oprah Winfrey, whom sources say would be Warner’s first choice for the role.

Smith can be seen next in Warner Bros. Focus, which also stars Margot Robbie. Hardy is currently filming The Revenant opposite Leonardo DiCaprio which bows next Christmas. Jai Courtney appears in the upcoming Terminator reboot.