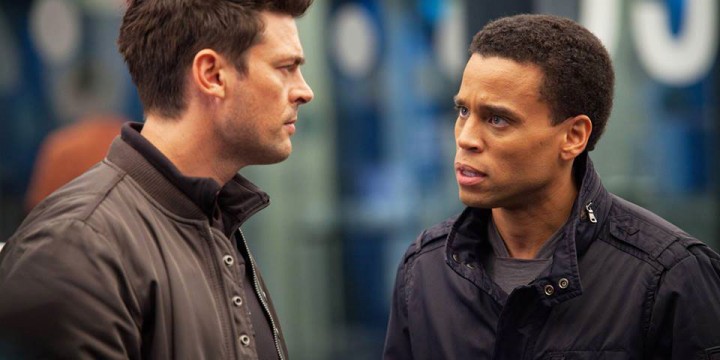 For the first time at NYCC, Warner Bros. Television will host a special sneak peek of two of this season’s most hotly anticipated new series on Thursday, October 10th, in Empire Theater 1-E. Complete pilot episodes of Almost Human – which premieres November 4th on FOX – and The 100 – Midseason on The CW – will be screened, along with an encore presentation on the big screen of the pilot of The Tomorrow People, which premieres on Wednesday, October 9th, on The CW.

Additionally, the cast and producers from Person of Interest and The Following will be signing autographs for fans. Tickets may be obtained via the New York Comic Con online ticket distribution system Right Here.

Almost Human
In the near future, technology and crime will increase so quickly that law enforcement will not be able to keep up. To maintain order and keep the public safe, all police officers are partnered with highly evolved human-like-androids known as synthetics. From J.J. Abrams’ Bad Robot Production and Fringe executive producer J.H. Wyman, Almost Human follows Detective John Kennex (Karl Urban – Star Trek), and his synthetic partner Dorian (Michael Ealy – Underworld Awakening) as they fight a new strain of urban crime. Almost Human premieres Monday, November 4, at 8/7c on FOX.

The 100
Ninety seven years ago, Earth was devastated by a nuclear apocalypse, and mankind was nearly destroyed. The only survivors were the inhabitants of 12 international space stations that were in orbit at the time. The stations came together to form the Ark, but with resources dwindling and population growth soaring, the decision is made to send The 100, a group of juvenile delinquents, to the surface to test whether Earth is once again habitable. Starring Eliza Taylor, Paige Turco, Thomas McDonell, Marie Avgeropoulos, Bob Morley, Christopher Larkin with Isaiah Washington and Henry Ian Cusick, The 100 airs Midseason on The CW.

The Tomorrow People
From executive producers Greg Berlanti (Arrow), Julie Plec (The Vampire Diaries), Phil Klemmer (Chuck) and Danny Cannon (Nikita), The Tomorrow People is a story of several young people from around the world who represent the next stage in human evolution, possessing special powers, including the ability to teleport and communicate with each other telepathically. Starring Robbie Amell, Luke Mitchell, Peyton List, Aaron Yoo, Madeleine Mantock and Mark Pellegrino, The Tomorrow People premieres on Wednesday, October 9, at 9/8c on The CW.