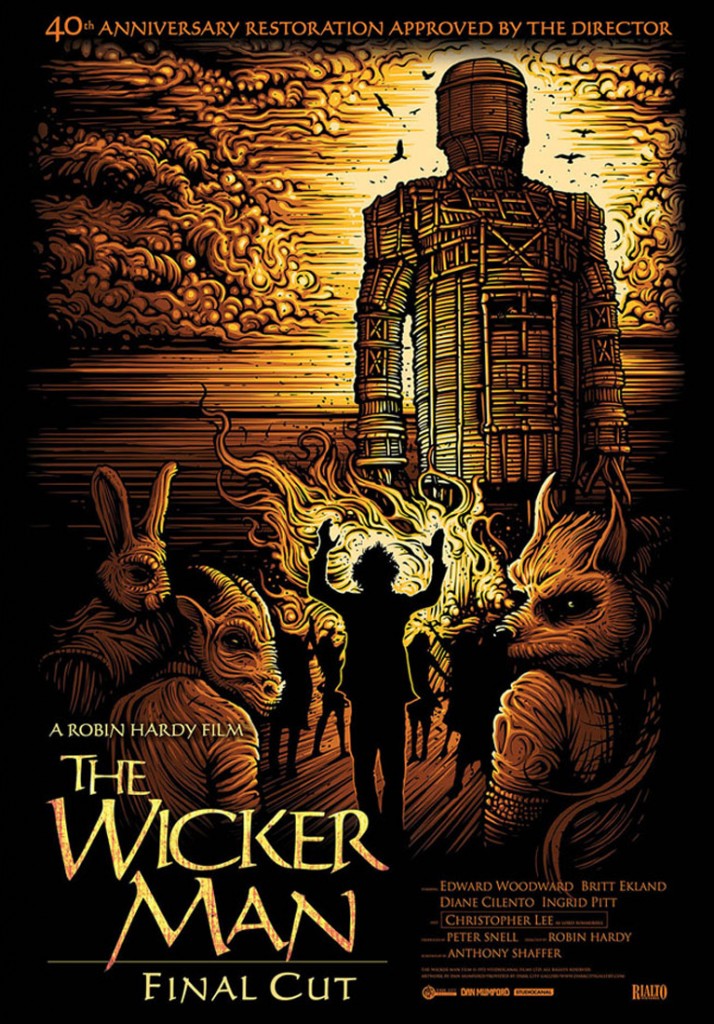 The long-unseen definitive version of British horror classic The Wicker Man will be presented in a new DCP restoration for the film’s 40th-Anniversary run. The Wicker Man will opening Friday, September 27th at IFC Center in New York City and at Nuart Theatre in Los Angeles, with a national release to follow.

The Wicker Man – Final Cut, the definitive version of Robin Hardy’s thriller of pagan worshippers on a remote Scottish isle, opens in a new director-approved DCP restoration for a special 40th-anniversary engagement starting Friday, September 27 at IFC Center. Seen for decades only in mutilated copies, the new restoration is the culmination of a long search (conducted via Facebook) for the complete director’s cut. A national roll-out from Rialto Pictures follows.

After receiving an anonymous letter about a missing 12-year-old girl, devoutly Christian cop Edward Woodward travels by seaplane to a remote Scottish island to investigate. But the islanders welcome neither his badge nor religious devotion, for laird of the isle Christopher Lee and his devoted followers worship only the pagan gods of old – and those gods demand a sacrifice. Woodward fears for the missing girl’s life and follows every possible lead to find her—despite the islanders’ interference—before she becomes a human sacrificial lamb.

Butchered by its doomed UK distributor to fit on double bills, with its original camera negative apparently lost, THE WICKER MAN has gathered a devoted fan base over the past four decades. Some missing scenes were recovered from an obsolete one-inch broadcast tape, but over the years there were rumors of complete 35mm prints floating around.

Earlier this year, the search intensified when worldwide rights holder Studiocanal initiated a Facebook campaign to recover the missing 35mm material, resulting in the discovery of a 92-minute 35mm release print at the Harvard Film Archive. This print was scanned and sent to London, where it was recently inspected by director Robin Hardy, who confirmed that it was the same cut he had put together for its American distributor in 1979, years after the film’s UK bow. This culminated in a digital restoration of the complete U.S. theatrical version, which director Hardy recently anointed as “the final cut.” Hardy, now 83, has said of this restored version, “It fulfills my vision.”