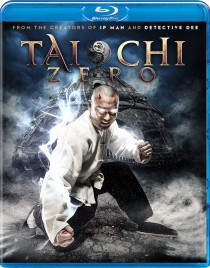 In order to be entered into the Tai Chi Zero random drawing:

The first chapter in a planned trilogy, director Stephen Fung’s (House of Fury, Jump) steampunk-infused martial arts epic Tai Chi Zero debuts on Blu-ray, DVD and Digital January 22nd from Well Go USA Entertainment. Featuring martial arts choreography by the legendary Sammo Hung (IP Man 2: Legend of the Grandmaster), the film follows Yang Luchan, a young genius who, tired of being picked on, travels to Chen Village to learn the art of Tai Chi. Luchan finds out the hard way that it is forbidden for a villager to teach an outsider when the villagers, from strong men to old women to little children, repeatedly challenge him to a series of fights, all of which he loses quite badly. But when a frightening army of steampunk soldiers bearing strange machines show up, the villagers realize that in order to save their home, they must trust this strange outsider with the knowledge of Tai Chi.

In legendary Chen Village, everyone is a martial arts master, using their powerful Chen Style Tai Chi in all aspects of their lives. Lu Chan has arrived to train, but the villagers are forbidden to teach Chen Style to outsiders, and do their best to discourage him by challenging him to a series of fights. Everyone, from strong men to young children, defeats him using their Tai Chi moves. But when a man from the village’s past returns with a frightening steampowered machine and plans to build a railroad through the village at any costs, the villagers realize they may have no choice but to put their faith in Lu Chan… who has a secret power of his own.

Check out the trailer for Tai Chi Zero, below.