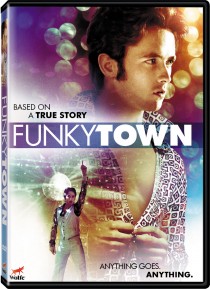 Wolfe Video gets into the groove next week, on October 2nd, when the the glitter, glamour and edginess of the 1970s returns in Daniel Roby’s Funkytown. To celebrate Funkytown’s release on DVD, FilmFetish is giving away 3 copies of the home entertainment release, to readers. The film stars Patrick Huard, Justin Chatwin, Paul Doucet, Raymond Bouchard, François Létourneau, Geneviève Brouillette, Sophie Cadieux and Sarah Mutch.

In order to be entered into the Funkytown random drawing:

I’ll be running the Funkytown contest through Monday, October 29, 2012.

The King of disco. The man with a secret life. The rising star eager to get ahead. The music producer desperate for one more hit. In Montreal in 1976, they all wanted to see and be seen at the trendiest club in town, and juggled freedom and tradition, lovers and family, drugs and sobriety, fame and anonymity, in a time when excess was the norm, and disco ruled. Based on true events, Funkytown brings back the glitter, glamour and edginess of that era.

Check out a gallery of images from Funkytown, below.