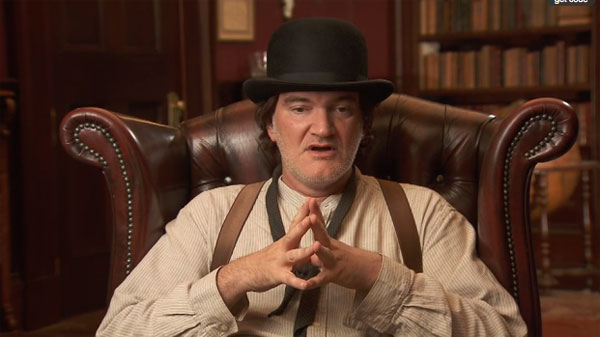 The Weinstein Company and Red Bull North America have announced an online contest for up-and-coming indie filmmakers with Django Unchained director Quentin Tarantino at the helm. Quentin has challenged filmmakers to “find your own voice,” and has harnessed the power of Red Bull Media House to help get the word out.

Beginning June 15th, contestants have the opportunity to inspire Quentin Tarantino with their own original content. Contestants will have two weeks to create and submit an original multi-media piece that will be viewed and judged by Quentin and his team. The piece must be a maximum of three minutes in length and incorporate footage from either the official Django Unchained trailer, or from one of three of Quentin Tarantino’s favorite spaghetti westerns that inspired the creation of Django Unchained. Included in those favorite spaghetti westerns are: Django, Sergio Corbucci (1966),The Grand Duel, Giancarlo Santi (1972) and Day of Anger, Tonino Valerii (1967). In addition, contestants must include a musical track from one of Red Bull Records featured bands including: platinum recording artist Awolnation, the UK’s breakout artist of the year, Twin Atlantic and dance chart artists Innerpartysytem as a part of the project’s soundtrack.

Contestants can begin by logging on to RedBullUSA.com/Django for more detailed contest information and to register as an official contestant. Beginning on June 15th all contestants and fans from around the world will be able to view exclusive Quentin Tarantino content as well as see the legendary director speak to the inspiration behind Django Unchained, his love of spaghetti westerns and the magic of cinema, as well as give advice to emerging artists.

The one lucky winner and guest will get the chance of a lifetime to meet Quentin Tarantino at Comic-Con in San Diego, CA after filming is complete for Django Unchained. The runner up will receive authentic Django Unchained memorabilia and other prizes, plus a Red Bull Fan Pick prize will also be awarded.

Check out a message from Quentin Tarantino about the “find your own voice” contest, below.