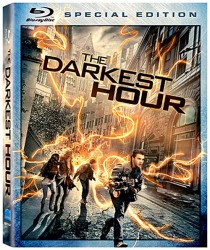 What surprised me most about the Blu-ray release of Summit Entertainment’s The Darkest Hour, was how much work went into the crisp quality of the disc, because the film is nothing more than a mediocre sci-fi film. The run-of-the-mill “action” thriller has its moments, and is mostly watchable, but with the level of special effects going into the genre these days, average just doesn’t cut it anymore.

In The Darkest Hour, two young Americans, Sean (Emile Hirsch) and Ben (Max Minghella), have travelled to Moscow on business, but arrive only to find a rival named Skyler (Joel Kinnaman) has stolen their new software idea. With hopes for a big deal in ruins, and the two visit a local club to drink their troubles away. There, they meet up with their nemesis Skyler, along with two girls, Natalie (Olivia Thirlby) and Anne (Rachael Taylor), with whom they quickly bond.

Just as the night’s getting started, the lights and all cell phones go black. Outside, a brilliant golden light fills the nighttime sky. Soon, individual collections of light descend to the surface. The partiers quickly learn that they’re not friendly. One touch and victims disintegrate into a pile of grey ash. In the panic, Sean, Ben, Skyler, Natalie, and Anne find refuge in a storeroom stocked with but limited supplies. As the days pass and their food runs low, they decide to seek help on the outside, knowing that staying put is just as much a death sentence. They find a dead city with few traces of life and the alien life forms harvesting Earth’s resources now that most of the resistance has been reduced to dust. They slowly find ways to fight back against the mysterious force, looking to answers and a way out.

Where The Darkest Hour shines is in the 1080p transfer, with brilliant color from one end of the screen to the other. The digital process looks close to film texture, with razor-sharp images. Viewers will see slight banding in scattered scenes, but not enough to take away from the overall experience. The same goes for the audio and soundtrack work on the film, which is a home run as well.

The Darkest Hour bonus features include:

The Darkest Hour Survivors: A very impressive short film that’s based in the world of The Darkest Hour.
Deleted and Extended Scenes: There are five deleted or extended scenes included on the disc, including: Anne and Natalie at the Airport, Skyler Brags to Tess, Ben and Vika Talk About Their Siblings, A Toast to the Fallen Comrades, and Natalie and Sean Talk About Anne and Ben. All of the clips have optional director commentaries.
The Darkest Hour: Visualizing an Invasion: This featurette is a detailed look at the process of creating The Darkest Hour’s visual effects.
Audio Commentary: The Darkest Hour director Chris Gorak discusses the history of the film, its similarities to the cult classic Red Dawn, the process of working in 3D, the cast, what it was like to shoot in Moscow, specific locations in that city, challenges of the shoot, the plot’s development, music and sound design, and more. The commentary is detailed, informative and helps break down the production process.

Below are clips and images from the Blu-ray release of The Darkest Hour.

The Darkest Hour – Film Clip: “Stay Away From The Light”