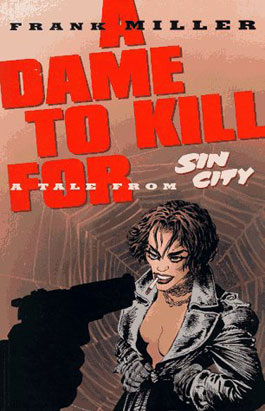 Its been a seriously long wait (can you believe 7 years?) but finally Dimension Films has announced that Sin City 2, which will be titled Sin City: A Dame To Kill For, has officially gone into production. After countless rumors, a press release the Weinstein Company has sent out tells fans it’s a go.

Officially titled Sin City: A Dame to Kill For, the movie will soon go into production in Austin, Texas at Troublemaker Studios, the home of the original film. Script details are still being kept secret, but the release does indicate that many of Sin City’s cast are set to return, however casting won’t actually begin until next week.

The comic version of A Dame to Kill For follows Dwight (originally played by Clive Owen) and his former love Ava Lord, who betrayed him and ended their relationship for a wealthier man. Ava then returns years later claiming her marriage is abusive and insisting that Dwight help her. After she frames him for the murder of her husband, Dwight, with the help of Marv (originally Mickey Rourke), seeks to clear his name. Dwight’s storyline in this film is a prequel to The Big Fat Kill, which occurred in the first Sin City movie. A Dame to Kill For explains how Dwight came to have his “new face” and his connections with the Old Town prostitutes.

Early reports indicated that Sin City 2 would also follow a second storyline, where Nancy (originally Jessica Alba) grieves over the death of Detective Hartigan (originally Bruce Willis), the man she had grown to love after he rescued her from Yellow Bastard (originally Nick Stahl), who had kidnapped and attempted to rape and then kill Nancy, when she was a child.

However, we don’t officially know if both, or either, of these story lines will make Frank Miller’s final script treatment.

Here’s the official press release from The Weinstein Company:

Filmmakers Robert Rodriguez and Frank Miller, along with producer Alexander Rodnyansky, have announced that production will commence on the highly anticipated sequel to 2005’s Sin City, entitled Sin City: A Dame To Kill For. The film will be produced by AR Films and Quick Draw Productions, financed through AR Films U.S and released domestically by Dimension Films.

“The first question I am always asked is “When will you make another Sin City? ,” said Rodriquez. “I have wanted to re-team with Frank Miller and return to the world he created since the day we wrapped the original, but have felt a duty to the fans to wait until we had something truly exceptional that would meet and exceed what have become epic expectations. A Dame To Kill For will certainly be worth the wait.”

Sin City creator, screenwriter and co-director Frank Miller said, “The first Sin City knocked out audiences who had never seen anything like it before. Robert Rodriguez and I are going to shake things up and deliver a ferocious film experience that is going to go even further than the first.“

The script and details of the film’s story have been kept tightly under wraps. Casting will begin next week, with many of the original cast expected to return. The film, a Quick Draw Production, will be produced by Rodriguez and producing partners Aaron Kaufman and Iliana Nikolic; and by Alexander Rodnyansky and Sergei Bespalov and Stephen L’Hereux. Miller, The Weinstein Company’s Harvey and Bob Weinstein and Miramax’s Adam Fields will act as executive producers. Sin City: A Dame to Kill For was developed by Frank Miller based upon his graphic novel, with a screenplay by Frank Miller and Academy Award winner William Monahan (The Departed). The film is expected to begin production this summer at Rodriguez’s Troublemaker Studios in Austin, Texas.

Alexander Rodnyansky said, “We are delighted to continue our relationship with Robert Rodriguez and Quick Draw Productions. It is a rare opportunity to produce and finance a film with the high profile and enormous fan base of the Sin City franchise. AR FIlms will be managing worldwide sales of Sin City: A Dame to Kill For, as well as Robert’s Machete Kills at the Cannes Film Festival in May.”

The original Sin City was brought to the screen by Rodriguez and Miller and released by Dimension in 2005, and proved to be a landmark step forward in filmmaking, breaking ground with immersive green screen to create its iconic stylish look. The first film, released on April 1, 2005, grossed over $160 million (US) worldwide and is a consistently strong home video and television performer.

“Audiences have been clamoring for Sin City 2 with Robert and Frank for a long time and trust me, it will be worth the wait,” said Bob Weinstein, co-chairman of The Weinstein Company. “This will be my 11th collaboration with Robert in 16 years and he’s become a great friend. I look forward to continuing our long lasting relationship and partnering on more projects in the future.”