That’s right, it wasn’t a typo. It might seem like Ferris Bueller’s Day Off and Psycho don’t have much in common, other than being a permanent part of the American pop culture lexicon, but both were also Paramount Pictures releases. So in honor of the Studio’s 100 year anniversary, this month The Loew’s Jersey will screen these two cult cinema classics from the Paramount Pictures vaults, along with Billy Wilder’s 1944 classic Double Indemnity, starring Barbara Stanwyck, Fred MacMurray and Edward G. Robinson. 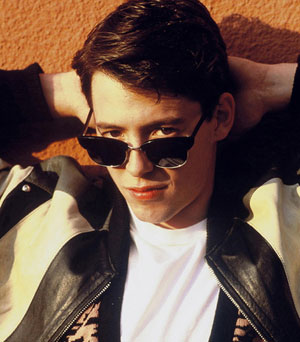 Every once in a while, a film comes along that manages to speak so clearly and directly to its generation’s collective consciousness that it becomes a cultural touchstone. In this case, it is the generation that came to age in the 1980s.

This story could have amounted to a cartoon-like or tedious film. But Broderick imbues Ferris with just the right level of smirky, confident, collar-up attitude to make this teenage fantasy seem plausible. And there are enthusiastic, just-right turns from the supporting players as well, with Jones shining particularly in the role of the over-zealous high-school principal. Even some of the smaller roles are memorable: look for great cameos from Ben Stein and Charlie Sheen. Writer/director John Hughes once again blends satire, slapstick and social commentary, and it all works well here, making points about status, friendship, authority and emotional neglect that not only resonate with anyone who’s found him- or herself in that void between childhood and adulthood, but which also fit well into the film’s overall comic flow. 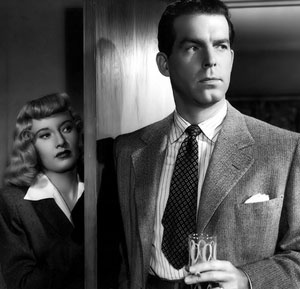 Directed by Billy Wilder and adapted from a James M. Cain novel by Wilder and Raymond Chandler, “Double Indemnity” represents the high-water mark of 1940s film noir urban crime dramas in which a greedy, weak man is seduced and trapped by a cold, evil woman amidst the dark shadows and Expressionist lighting of modern cities.

Phyllis Dietrichson (Barbara Stanwyck) seduces insurance agent Walter Neff (Fred MacMurray) into murdering her husband to collect his accident policy. The murder goes as planned, but after the couple’s passion cools, each becomes suspicious of the other’s motives. The plan is further complicated when Neff’s boss, Barton Keyes (Edward G. Robinson), a brilliant insurance investigator, takes over the investigation. Told in flashbacks from Neff’s perspective, the film moves with ruthless determinism as each character meets what seems to be a preordained fate. Movie veterans Stanwyck, MacMurray, and Robinson give some of their best performances, and Wilder’s cynical sensibility finds a perfect match in the story’s unsentimental perspective, heightened by John Seitz’s hard-edged cinematography. Double Indemnity ranks with the classics of mainstream Hollywood movie-making. 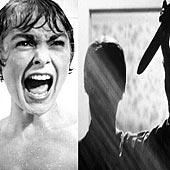 Perhaps no American movie before had been more direct and unapologetic about violence or served it up with such disorienting abruptness and even tongue-in-cheek wit. Fleeting nudity, a casual depiction of sex outside marriage, and a focus on the psychological subtext of a murderer’s personality were also shockingly new to the screen.

Janet Leigh is bored in her menial job in a real estate office and frustrated in her romance with a hardware store manager. On a whim, she takes off one afternoon with $40,000 that she was supposed to deposit into her employer’s bank account. Thirty six hours later, paranoia and exhaustion have started to set in, and Leigh decides to stop for the night at the Bates Motel, where nervous but personable innkeeper Norman Bates (Anthony Perkins) cheerfully mentions that she’s the first guest in weeks.

There’s hardly a film fan alive who doesn’t know what happens next, but in addition to the shower scene there are dozens of memorable bits throughout this film. With “Psycho,” Director Alfred Hitchcock re-wrote the rules for what a thriller could and should be. But often, a groundbreaking film will seem disappointingly ordinary and tame when viewed years later in the wake of succeeding films that tried to push those boundaries even further. What is truly remarkable about Psycho is that 52 years later it is still genuinely terrifying.

All screenings will take place at The Landmark Loew’s Jersey, located at 54 Journal Square in Jersey City, New Jersey.

CLICK HERE to confirm the schedule and for additional information. 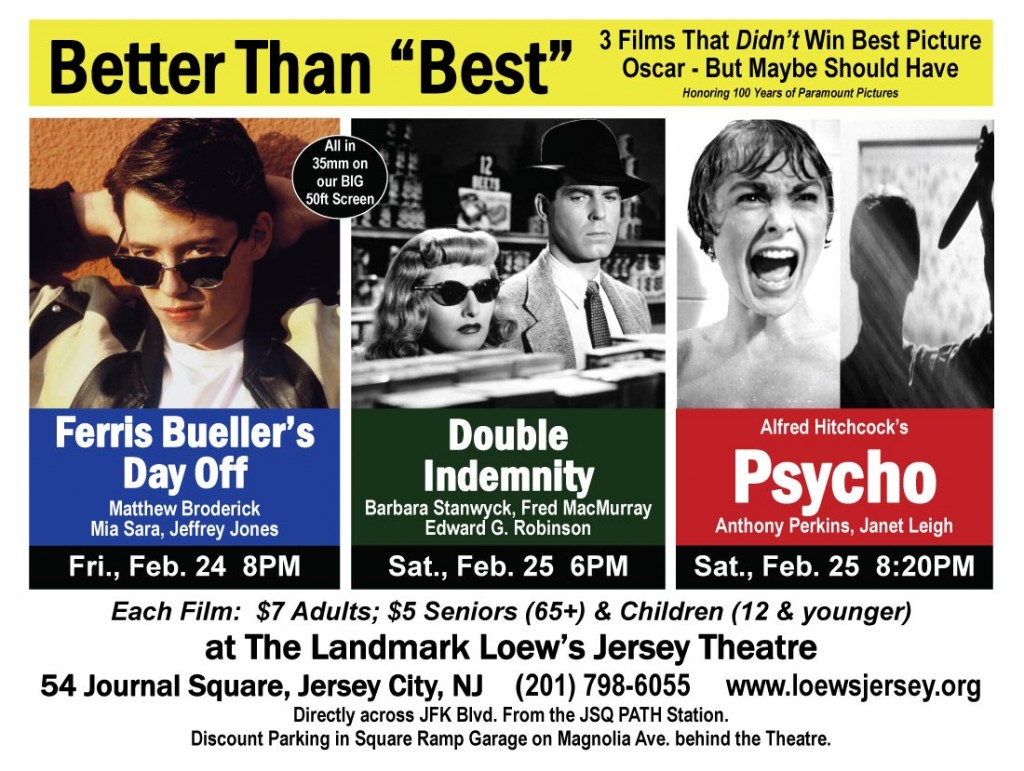