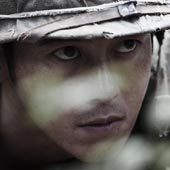 Well Go USA has released new images and a trailer for the Korean War thriller The Front Line, which will begin a limited U.S. release on January 20, 2012 in the New York City area at the AMC Empire 25 in Times Square, AMC Ridgefield 12, and the AMC Bay Terrace, and in Los Angeles at CGV Cinema and the AMC Del Amo.

Toward the end of the Korean War, an uneasy ceasefire is ordered, but out on the Eastern front line of the Aerok Hills, in an expanse of land called the Aero.K, fierce fighting continues. A race to capture this strategic point to determine a new border between the two Koreas is the ultimate prize.

At the Eastern border stands the “Alligator Company,” known to be the best soliders on the front line. They are the only unit to have survived the worst battle of the war at Pohang. When a South Korean bullet is found in the dead body of a company commander, Lieutenant of Defense Security Command Kang Eun-Pyo (Shin Ha-Kyun) is ordered to investigate Alligator Company for the murder. Upon arrival, Kang Eun-Pyo is immediately shocked at the state of the soldiers, the conditions on the front, and the presence of Kim Soo-Hyuk, a former friend he believed to be dead. With a truce promised for years but no end in sight, one man struggles to make sense of a crime in the face of countless lives sacrificed for war.

Check out the trailer and a gallery of images from the official South Korean foreign language entry for the 2012 Academy Awards, The Front Line. 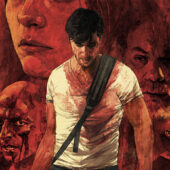 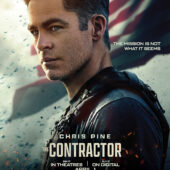