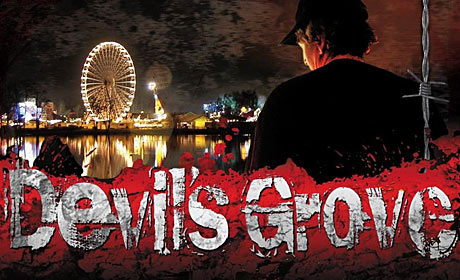 I was surprised at the production quality and realism of the gore in Devil’s Grove. The story is merely there to fill the minutes – some film students making a documentary about a local amusement park years after there was a brutal mass killing there. The real reason to watch this torture horror is for the torture scenes, which are absolutely brutal. Add to that special effects which truly make you fear for the victims in the film.

If you’re into movies like Hostel and Saw, then Devil’s Grove is one you’ll definitely want to watch.

The only bonus material you’ll find on the DVD include the film’s trailer, a set of production stills, and a reasonably good commentary by co-directors Michael J. Hein (founder of the New York City Horror Film Festival) and R. Zoe Judd, as they discuss their experiences making the film and working with the cast and crew.

Check out the trailer for Devil’s Grove below.