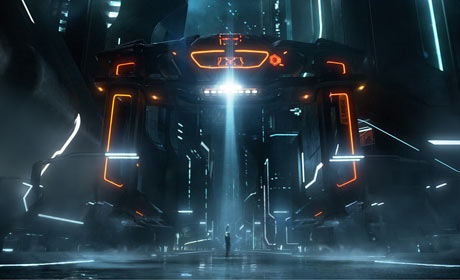 Tron: Legacy, the sequel to the cult classic 1982 film Tron, takes viewers back to the world of “The Grid,” this time with 30 years of technology to play with. Original stars Jeff Bridges (Kevin Flynn) and Bruce Boxleitner return, playing both their human and digital counterparts, this time joined by Garrett Hedlund and Olivia Wilde. Hedlund plays Flynn’s now 27 year old son, who has reluctantly inherited his father’s digital empire. After receiving a mysterious secret signal from the digital realm, the young rebel is pulled into “The Grid.” With the help of the fearless female warrior played by Wilde (Quorra), father and son venture through an incredible cyber universe and wage the ultimate battle of good versus evil.

TRON: Legacy’s success as a stand alone film is merely a part of what this visual and technical treat provides. An interesting story, striped of the usual convoluted gimmicks modern sci-fi “epics” offer, add layers of meat for viewers to devour handily. By the second half of TRON: Legacy, the strength of the movie’s themes and characters keep interest at a reasonable level, supported by a unique soundtrack provied by Daft Punk.

The use of CGI as an art form also helps, immersing the viewer into the world’s detail and splendor, in a landscape dotted by funky vehicles and cool weaponry. Disney has succeeded in presenting a CGI motion picture unlike anything ever seen, with my only real issue being that I wanted to see more of everything, particularly more of the fairly effective character development that kept the movie humming along.

Academy Award Nominated for Best Sound Editing, TRON: Legacy dishes out a near-perfect Hi-Def Blu-ray experience with crisp 1080p visuals and superior 7.1 surround sound, bringing to life the visually stunning world of TRON. Taking you further behind the grid, are also in-depth bonus features on the making of the film, which include creating the futuristic vehicles and the world of TRON, storyline mythologies, character development and more, along with the all-new bleeding edge Disney Second Screen interactive experience.

Check out this video preview of the functionality of Disney Second Screen.

Check out screenshots from TRON: Legacy below.

All Images: © Disney. All Rights Reserved.