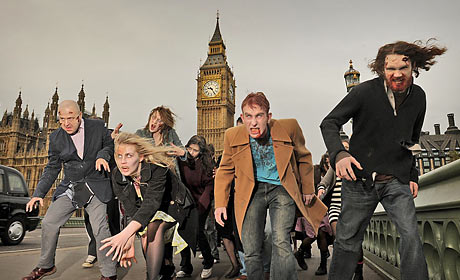 It’s a shame people can only come together in death. That said, this past Tuesday’s Global Zombie Invasion, done to celebrate this Halloween weekend’s premiere of The Walking Dead, goes down as one the largest – if not the largest – zombie walk in history. And judging from the photos, one “hell” of a good time.

Check out The Walking Dead this Sunday, October 31st, at 10 p.m. ET/ 9 p.m. Central. For the first time ever, the series will begin to premiere globally a few hours after AMC’s U.S. launch. Similar to a theatrical film release, all FIC markets will launch the first episode during the same week, before the release of the second episode in the US. “The Walking Dead” will debut in 120 countries, air in 33 languages and be viewed in 250 million households when it premieres.

Gale Anne Hurd (The Terminator, Aliens, Armageddon, The Incredible Hulk), Charles “Chic” Eglee (Dexter, The Shield, Dark Angel), and David Alpert serve as Executive Producers on The Walking Dead. The original AMC series is based on the comic book series written by Robert Kirkman and published by Image Comics. Kirkman also serves as an executive producer on the project and three-time Academy Award-nominee Frank Darabont (The Shawshank Redemption, The Green Mile) serves as writer, director and executive producer.

Below is a list of the 26 “infected” cities that took part in the Zombie Invasion, along with photos we’ve nabbed from many of the cities involved. Enjoy your Halloween weekend!