Charade, one of my favorite pieces of classic cinema, is coming back to the big screen for a special screening at the Landmark Loew’s Jersey Theatre, on September 25th.

Stanley Donen’s Charade is a stylish Hitchcock-inspired tribute to class and good ole fashioned murder mysteries. The film showcases beautiful location cinematography of early 1960s Paris, and has a classic and memorable score by Johnny Mercer and Henry Mancini.

The one-of-a-kind Audrey Hepburn plays Regina Lampert, an innocent woman caught in a web of intrigue and deceit, after her husband Charles is thrown of a commuter train and she realizes little that she knew about him was the truth. The twist-filled thriller unwinds as she is pursued by three mysterious men who apparently were her husband’s accomplices in the theft of a large sum of now missing money, after World War II, including: The bad-tempered Herman Scobie (played by George Kennedy), who has a kill’em all and give-me-my-money attitude; Tex Panthollow (James Coburn), who sports a hilarious southern accent, and is always a gentleman, as long as Mrs. Lampert hands over the money of course; and the mousy Leopold W. Gideon (Ned Glass), a shy, but crafty and evil man, who introduces himself to Mrs. Lampert at a dance club and warns of her impending death-by-citrus-fruit, if she doesn’t hand over the missing money.

Now before Mrs. Lampert meets all of these three likable killers, she’s been made aware of the situation by a U.S. intelligence agent who works for the embassy in France – Hamilton Bartholemew (brilliantly played by Walter Matthau). So the newly-widowed woman already has some clues as to what the men are looking for. By this time, she’s also become fast friends with Peter Joshua (played by Cary Grant), from whom she later seeks protection and his reluctant affection. However Joshua has layers of secrets too, including multiple aliases. Soon, neither the increasingly desperate Hepburn nor the audience knows what to believe or whom to trust.

A great piece of cinema, which amazingly, is in the public domain.

Also on the schedule for this season-opening event, is Michael Powell’s Peeping Tom (1960) and the Orson Welles-directed film The Stranger (1946), both of which have themes in common with Hitchcock’s filmmaking – evil amid the ordinary.

Check out the trailer for Charade below.

Here’s the entire schedule of events:

All screenings take place at The Loew’s Jersey, located at 54 Journal Square, located in Jersey City, New Jersey. CLICK HERE for more information and to confirm the screening times. 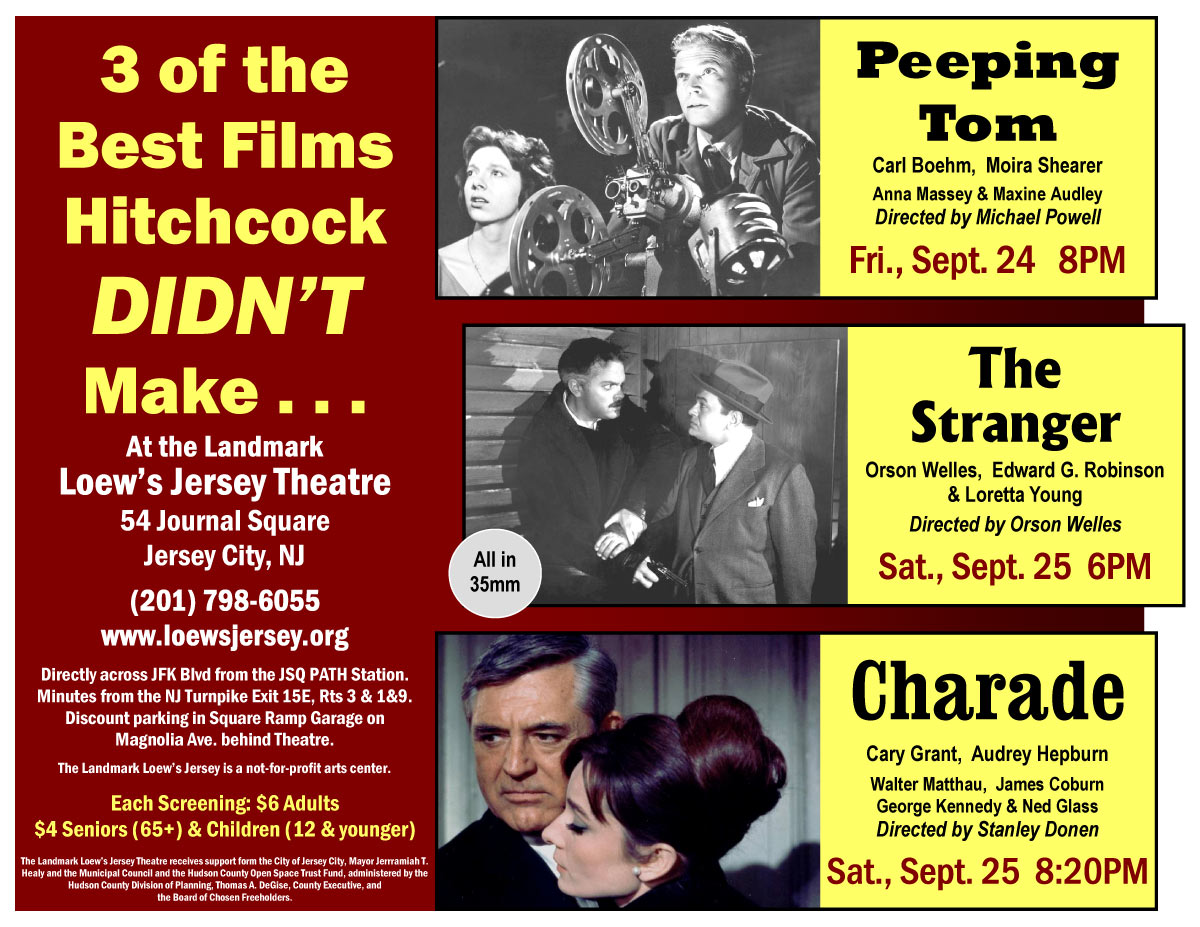