Norman Reedus from the cult classic The Boondock Saints, stars in The Beatnicks, which is coming to DVD on April 13th. To celebrate the release of this unique independent film, FilmFetish is giving away a dvd/soundtrack combo prize pack, featuring a DVD autographed Reedus.

In order to be entered into this random drawing for a free combo pack of The Beatnicks, you must also:

I’ll be running this contest through The Beatnicks’ DVD release date of April 13, 2010. 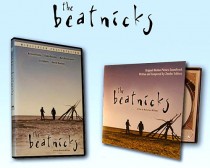 Norman Reedus, perhaps best known for cult phenomenon The Boondock Saints stars in the long awaited release, The Beatnicks. In addition to Norman Reedus, the film stars Mark Boone Jr.(award winning FX series Sons of Anarchy), Elodie Bouchez (Alias) & co-stars Eric Roberts (Batman: The Dark Knight), Jon Gries (Napoleon Dynamite) and Patrick Bauchau (The Pretender). The film is available to Save now on Netflix and will be available for retail sale and rental on April 6, 2010 via Passion River Films.

Set in Los Angeles, The Beatnicks are a poet and a musician named Nick, known as The Beatnicks in search of a gig. They find a magic box on the beach, that when opened, creates amazing music that hypnotizes anyone who hears it. The Nicks use the box to get booked for a show, but their abuse of the box’s powers has unforeseen consequences. The poet falls in love and the musician meets a guru. Ultimately, they must both learn the lesson of “no suffering, no understanding” . As the film concludes, The Nicks reach a deeper understanding of themselves and the box earns them the gig of a lifetime.

The Beatnicks is a unique independent film that is another example of the power of social media and viral marketing. With over 20,000 online fans, The Beatnicks is an eagerly anticipated DVD release amongst the cult fans that gave The Boondock Saints its underground success. With over $50 million in DVD revenues, The Boondock Saints was an incredible example of phenomenal grass roots marketing which the The Beatnicks will surely immolate. Norman’s excellent performance as Nick Nero in the film brings out the same snarky and bad-ass persona reminiscent of his Boondock Saints character, Murphy McManus. The potential for another cult hit is all, but certain.

After years of perseverance and creative marketing, the producers of the film built up a significant online presence for The Beatnicks. “It was about 2 years ago that enough people were asking for the film that made me regroup, put my filmmaker hat back on and take on the challenge of self distribution. What’s amazing about distribution today, is that the internet has created a whole new science out of getting your film to its target audience and I have only scraped the surface.” says Garen Topalian, executive producer of The Beatnicks.

Check out the trailer for The Beatnicks below.

Please note: These giveaways will be sent directly from the producer of the film.