Jennifer’s Body was so much more than advertised. In the poster and in trailer after trailer, the movie’s star Megan Fox is front and center, pushing the teen male hormone exploitation factor, which as a male, I didn’t have much of a problem with. However, I wasn’t very excited about the film beyond the obvious. This, even though I am a big fan of both the writer and director of the project – Diablo Cody and Karyn Kusama. But seeing isn’t always believing, and Jennifer’s Body proved that yet again…and in a good way this time.

Jennifer’s Body centers on a nerdy, reserved bookworm named Needy and her arrogant, conceited cheerleader best friend Jennifer, who have very little in common. They share even less in common when Jennifer mysteriously gains an unhealthy appetite for human blood after a violent act and disastrous fire at a local bar. As Needy’s male classmates are steadily killed off in gruesome attacks, she attempts to uncover the truth behind her friend’s mysterious transformation, and find a way to stop the bloodthirsty rampage before it reaches her own boyfriend Chip.

The film has a neatly wrapped “package” in Megan Fox, who is very affective as the boy-devouring she-devil, but Jennifer’s Body has a lot more going on than the average, cliche-laden, blood and body count teen slasher film. While it may not be scary or violent enough to satisfy some of today’s desensitized horror fans, it has so much to say about female relationships and growing up, it doesn’t matter. Add a touch of Diablo Cody’s dark humor, and we may be looking at a future addition to FilmFetish Cult Cinema Icons library. Director Karyn Kusama works well against Cody’s writing style as well, lensing the film in rich tones, worthy of its pop culture-packed roots. Check out Jennifer’s Body if you want to see Megan Fox heat up screen (obviously), but also watch Jennifer’s Body for more than just a body, but for a satisfying and original dark comedy. 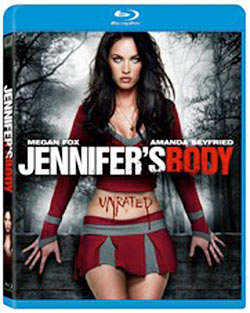 Theatrical and Unrated Extended Cut of Jennifer’s Body
The disc includes the theatrical and unrated versions of the film. The unrated cut adds a few more scares, but not much more skin. Overall, I prefer the unrated cut.

Commentary by Director Karyn Kusama and Writer Diablo Cody (Theatrical Version)
The female filmmaking team of Kusama and Cody give an insightful commentary, discussing the film’s characters and themes, and give a good perspective of where Jennifers Body fits in the horror genre lexicon.

Commentary by Director Karyn Kusama (Extended Version)
Kusama discusses the differences between the theatrical and unrated cuts of the film. I enjoyed this, as it alerted me to some clips I might have otherwise missed.

Deleted Scenes (HD)
There are six extended versions of existing scenes from the film, which give more perspective on the main characters in the movie.

Gag Reel (SD)
The gag reel includes flubbed lines, as well as random clips from the film and other behind-the-scenes footage.

Jennifer’s Body: The Dead Pool (HD)
This is a well done behind-the-scenes featurette, focusing on the shooting of the climactic confrontation that takes place in an indoor pool.

Megan Fox is Hot (HD)
I’m not ashamed to admit, this was a highlight for me. All the sexiest shots of Megan Fox from the movie have been stitched together, one after another. In HD it’s worth at least a couple of views.

Megan Fox PSA About Peer Pressure (SD)
Megan’s public service announcement is all about the importance of being who you are.

Digital Copy
Disc 2 includes a digital copy of Jennifer’s Body, which can be downloaded onto your computer, for use on various mobile devices.