Baltasar Kormakur, creator of modern arthouse classics 101 Reykjavik and The Sea, returns with a bracing adaptation of chekhov’s drama of marital discord, Ivanov in Iceland’s official entry for the 2009 best foreign language Oscar, White Night Wedding (Brúðguminn). The DVD was released this past Tuesday, on September 15th, and to celebrate, I am giving away three copies of it away for readers to enjoy. 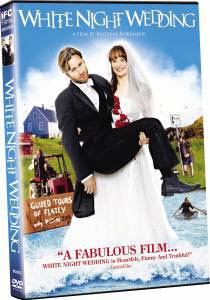 In order to be entered into the random drawing for your free DVD copy of White Night Wedding, you must also:

I’ll be running this contest through next Tuesday, September 22, 2009.

Baltasar Kormakur, the director of such arthouse hits as 101 Reykjavik and The Sea, puts a modern spin on Chekhov in White Night Wedding, a poignant comedy-drama making its American debut on DVD from IFC films and MPI Media Group.

White Night Wedding, which is set in modern-day Iceland , centers on a middle-aged professor of Chekhov named Jon (Hilmir Snaer Gudnasson), who is preparing to marry an ex-student half his age in just 24 hours. Not everyone thinks this “blessed union” is a good idea, among them the parents of his future wife, Thora (Laufey Eliasdottir). For one thing, Jon’s first wife (Margret Vilhjalmsdottir, from the film Flashbacks) committed suicide only a year ago and he remains racked with guilt. For another, Thora’s parents run the only store, hotel and bar on the island of Flatey where the wedding is to take place, and Jon owes his future mother-in-law money. Even the reverend who is to conduct the ceremony (played by co-writer Ólafur Egilsson) thinks the marriage is doomed. As the guests flock to Flatey, the groom begins to get cold feet. Can love survive one final night under the midnight sun or is the road to happiness paved with blissful ignorance?

White Night Wedding was one of Iceland’s biggest box-office hits and was the country’s official entry for the 2009 Academy Awards as best foreign-language film. It was selected at major film festivals, including Toronto, Helsinki, Seattle and Istanbul.