The fact-based shocker, PVC-1 – which was shot in one continuous, riveting take – made its U.S. debut on DVD this Tuesday, September 15th, following a triumphant, award-winning tour of film festivals worldwide. To celebrate the release of this hard-boiled crime thriller, Film Fetish is giving away 3 copies of the DVD to readers. 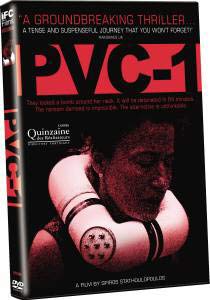 In order to be entered into the random drawing for your free DVD copy of PVC-1, you must also:

I’ll be running this contest through next Tuesday, September 22, 2009.

There’s no escape – for the victim or the viewer – in PVC-1, a remarkable thriller that sets a new course for suspense cinema. The Colombian drama, based on a true-crime story, makes its U.S. debut on DVD September 15, 2009, from IFC Films and MPI Home Video.

Director Spiros Stathoulopoulos tells the story of a poor family in rural colombia whose world is suddenly, horribly turned upside down. A group of masked men invade the family’s home and lock PVC-1 tubing filled with explosives around the wife’s neck. If they don’t receive ransom money by their stated deadline, they will detonate the bomb. As events unfold in real time, Stathoulopoulos’ glidecam becomes the viewer’s eyes, unable to look away as the clock ticks down and the victim’s every frantic move becomes a matter of life and death. The largely nonprofessional cast adds to the film’s authentic this-is-really-happening effect.

Check out the trailer for PVC-1 below.