I Love You, Man casually strolled into theaters last March and caught audiences off guard with an original, modern and heart-felt story of friendship that dished out plenty of honest and raw laughs. The film delivers some of the most hilarious moments from a comedy in a long time, thanks in no small part to excellent writing from John Hamburg (who also directs) and Larry Levin, who take a down-to-earth approach to their exploration of love and fellowship, which acts as an wonderful backdrop to a batch of first-rate jokes. I Love You, Man simply got it right, and ends up being a charmer that many of us seeking love and honest friendship can surely relate to. 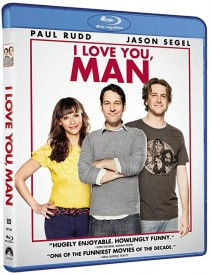 The film tells the story of a Real estate agent named Peter (Paul Rudd), who has no male friends, that finds himself in need of a best man for his upcoming wedding to his girlfriend Zooey (Rashida Jones). After a series of failed and awkward encounters, he finally bonds with the fun-loving Sydney (Jason Segel). Rudd and Segel’s “bro-mance” takes male-bonding in new, but still strictly platonic, directions, as they attempt to figure out what it really means to be a friend. The question is, can Peter successfully balance the needs of both the guy and the girl in his life, that are now such an important part of his happiness, without wrecking either relationship?

The Blu-ray edition of I Love You, Man offers a standard, but enjoyable and funny selection of bonus features. Things start off with an entertaining Commentary Track featuring director John Hamburg and stars Paul Rudd and Jason Segel. The trio talk about what it was like shooting at certain Los Angeles locations, test audience experiences, working with real-life friends on the film, developing the main characters, and much more. The Making of I Love You, Man (presented in HD) is a by-the-numbers featurette that examines the genesis of the project, the script, casting the film, the creation of select special effects, bodybuilder Lou Ferrigno’s role in the project, and more. The talented cast make this otherwise standard short entertaining to watch. Also included is a series of Outtakes (presented in HD), which contain alternate dialogue from nine scenes. This was the most enjoyable segment of the bonus material for me, with the cast improvising a great deal of the dialogue. Rounding out the extras is a collection of three deleted scenes, six extended scenes, a pretty funny gag reel, along with the movie’s red band theatrical trailer, all of which are presented in HD.

Below is an exclusive DVD clip, featuring a deleted scene of the Groomsmen at a photo session, showing off pants, pecs, undies and more.