Billy Bob Thornton sprang onto the Hollywood scene by writing, directing and starring in the 1996, 2-time Academy Award winning film Sling Blade. His portrayal of a mentally challenged man named Karl, who returns to his hometown after spending 25 years in a mental institution, is astonishing. 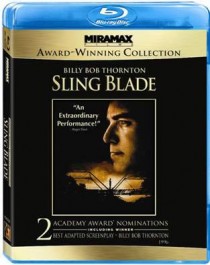 Despite having killed his mom and her boyfriend at the age of 12, Karl is deemed fit to be placed back into society, and soon after returning home, is befriended by a young boy named Frank Wheatley (Lucas Black) and his mother Linda (Natalie Canderday). His caseworker from the hospital helps Karl get a job doing repair work for a local business, and life is finally starting to come together for the wayward man. However, Karl soon realizes that his new friends’ happiness is being prevented by Linda’s abusive boyfriend Doyle Hargraves (Dwight Yoakam), who’s extremely cruel to both Frank and his mother.

Vaughan Cunningham (John Ritter), a homosexual friend of Linda’s, who manages the store she works at, is the only stable male in their lives. But Vaughan doesn’t have the strength or courage to protect Linda and her son from Doyle, and as Karl’s bond with the family grows stronger, he begins to feel that it could be his job to protect them… any way he can.

CLICK HERE to visit our gallery of Sling Blade photos.

Below are video clips from Sling Blade.