Originally released in 1998, the Frank Coraci (he also directed Sandler’s cult classic The Wedding Singer and the more recent Click) film Waterboy, is one of Adam Sandler’s best classic comedy efforts. The Touchstone film was finally released to the Blu-ray format for the first time on August 4th, from Buena Vista Home Entertainment. 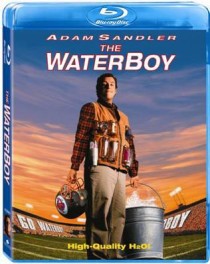 The Waterboy is Bobby Boucher (Adam Sandler), an odd young man who serves this namesake duty for his college football team. He takes his job just a little too seriously as the “water distribution engineer”, and pays no attention to the fact that his teammates treat him with no respect and get their laughs at his expense every chance they get.

Kathy Bates plays Helen ‘Mama’ Boucher, who is overly-protective of her son. She uses her influence to manipulate Bobby and convince him to do anything she wants, limiting his life experience in the process. One day at practice, a player insults Bobby’s mom, which drives Bobby stark raving mad. He violently tackles the player and immediately catches the eye of the team’s coach (Henry Winkler), who realizes that if he can harness Bobby’s thunderous passion for his mother – and water – he can potentially create a star athlete that could save his team’s season. With Bobby on the squad, they soon go from being ceaseless losers, to a hard-hitting, winning powerhouse, thanks to Bobby’s merciless tackling and blocking.

Along the way, Bobby manages to catch the eye of Vicki (Fairuza Balk), a local girl who has a reputation for being easy. When Bobby brings Vicki home to meet Mama Boucher, she is not happy. Bobby has to find the strength, not just to make tackles, but to face up to an overbearing mother, who will explode when she finds out that her son is playing football, in addition to dating a girl she doesn’t approve of.

The Waterboy’s fun, irreverent humor and simple story-line was a real crowd-pleaser. Sandler’s character must find a way to balance playing football, the two demanding women in his life, plus going to college, all at the same time. In the end, it’s an amusing and heartwarming movie to experience, and was a joy to experience in the quality of Blu-ray.

My only complaint with the presentation is the lack of bonus features, especially behind-the-scenes moments and outtakes, which were probably hilarious, with a film such as this.

The Waterboy Blu-ray is presented in 1.85:1 aspect ratio, at 1080p widescreen, with audio in English and French 5.1 DTS and Spanish 2.0 Dolby Digital, with subtitles in English SDH, Spanish and French.