Born at the conclusion of WWI, the prune-faced and frail Benjamin Button (Brad Pitt) is rejected by his father (Jason Flemyng) and left at the doorstep of Queenie (Taraji P. Henson), who runs a retirement home in New Orleans. The resident doctor suggests that Benjamin’s chances of survival are low. However, the resilient child perseveres, and goes on to lead an extraordinary live that most people couldn’t conceive of. 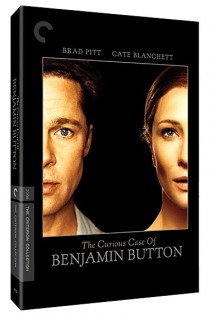 Mapping David Fincher’s progression as a filmmaker, you can clearly see the adeptness he’s developed at using color, design, storyboards, digital effects and brilliant actors, to move his films along at just the right speed, keep you interested and to provoke ruminations on one’s own life. With The Curious Case of Benjamin Button, Fincher takes the ultimate step forward, removing typically popular genre underpinnings almost completely and relying solidly on the skills that have been honed through his previous work, like Zodiac, The Game and Se7en.

I also thought it was exciting to see Fincher continue to show how CGI can be a powerful force in cinematic storytelling, as he brings the magical world of Benjamin Button to life, and seamlessly transforms Brad Pitt believably into a hopeful, sensitive and intelligent figure. Zodiac was essentially a primer for Fincher’s brilliant use of digital effects in Benjamin Button. Not only does the director realistically age his characters, he injects life and drama into scenes with their use. For example when Benjamin Button’s tugboat is attacked by the Germans during the war, and you can feel every bullet ripping apart the ship’s deck. This is especially effective in the clarity of the Blu-ray disc format. I almost expected wood chips to start peppering my face during that scene.

The Curious Case of Benjamin Button credits a short story by F. Scott Fitzgerald as its inspiration, but screenwriter Eric Roth adds incredible weight the basic premise of a man born old that ages in reverse. The timeframe of the source material is altered, and there are a number of events in the movie not found in Fitzgerald’s original text.

The reality is, we all have part of this unique and gentle character within us, making Button more than just an enchanting fantasy (which he is), but in his story there’s a message about how we need to be hopeful in our existence, and accept change as part of the life’s unending education.

Button enjoys exquisite period details by production designer Donald Graham Burt and costume designer Jacqueline West, eloquent and rich cinematography from Claudio Miranda, and a lush score by Alexandre Desplat, all of which work together to enhance a historic work of modern filmmaking. When you add to that the illustrious acting by the entire cast, all you can really say that hasn’t already been said by countless film reviewers is – what will Fincher come up with next?

The Criterion Collection, an ongoing series of important classic and contemporary films, produced the disc presentation. Since 1984, they have been dedicated to gathering the greatest films from around the world and publishing them in editions that offer the highest technical quality and award-winning, original supplements. If you’re not familiar with their editions, that should give you an idea of the quality and depth of the bonus content on these discs. The set boasts over three hours of enthralling special features including interviews with stars Brad Pitt and Cate Blanchett, along with behind-the-scenes footage of their astonishing on-screen transformations, exploring the incredible visual effects techniques created specifically for the film that allowed Pitt to play the title character at every age., an in-depth documentary revealing the unusual journey of the film itself including an exploration of the groundbreaking computer wizardry that brought the magical world of Benjamin Button to life.

Another aspect of the main multi-segment making-of featurette follows the production from day one including the challenges of designing over five thousand costumes and creating the animatronic baby. The commentary track features Academy Award-nominated director David Fincher introducing the surprising beginnings of Benjamin Button, including the casting of Pitt and Blanchett and the decision to change the location of the story to New Orleans.

Also included is a visit to the scoring stage of composer Alexandre Desplat. This will be an entertaining journey for fans of music scores.

Finally, you’ll join the cast and crew on the red carpet, at the film’s premiere in New Orleans, with final reflections on the process.