Next Tuesday, April 7th, Miramax Films and Walt Disney Studios Home Entertainment will release No Country for Old Men: Collector’s Edition on Blu-ray and DVD. The 2007 Oscar winner for Best Picture arrives with more than five hours of bonus features including extensive interviews with the filmmakers and an unauthorized trip backstage with star Josh Brolin for an insider’s look at the unique filmmaking process of the Coen brothers. To celebrate the release, FilmFetish is getting two copies of the Collector’s DVD Edition for two lucky readers to enjoy.

I’ll only be running this contest through next Tuesday, the day the DVD hits store shelves. Good luck! 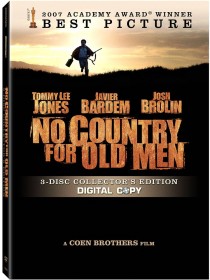 Acclaimed filmmakers Joel and Ethan Coen’s most gripping and ambitious film, No Country for Old Men – Collector’s Edition comes with more than five hours of bonus features, available on DVD and Blu-ray for the first time ever, including extensive interviews with the filmmakers, stars and technical team behind this unforgettable thriller. From an unauthorized trip backstage with star Josh Brolin, to an insider’s look at the unique moviemaking process of the Coen brothers, fans will get unprecedented access to the story behind the celebrated movie. In addition, both the DVD and Blu-ray versions include a special digital copy of the movie that enables viewers to enjoy it anywhere, anytime in their choice of iTunes or Windows Media formats.

The Coen Brothers deliver a sizzling and supercharged action-thriller with No Country for Old Men, based on the novel by Pulitzer Prize-winning author Cormac McCarthy. Llewelyn Moss (Josh Brolin), a down-on-his-luck Vietnam vet, stumbles across an illicit fortune and decides to keep it, setting off an unstoppable chain of violence. When Moss discovers a drug deal gone bad in the West Texas desert, he decides to keep the two million dollars he finds there and hit the road. In short order, both Ed Tom Bell (Tommy Lee Jones), the local sheriff, and Anton Chigurh (Javier Bardem), one of the most frighteningly amoral psychopaths in film history, are on his trail and Moss is scrambling to stay one step ahead of the law—and avoid a gruesome fate at Chigurh’s hands.