As with all seasons of South Park, Trey Parker and Matt Stone make fun of everything they can get their hands on in Season Twelve. The show is just as hilarious as ever, and like The Simpsons, doesn’t show any signs of slowing down. 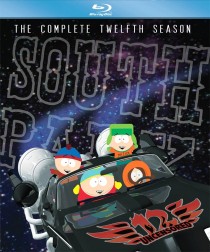 Originality certainly helps – along with a genuine fanboy knowledge of pop culture. For example, the third episode of this season, titled Major Boobage, which pays homage to the 1981 cult classic Heavy Metal, and has the boys attempt to get Kenny off the latest drug craze that’s captured the imagination of the junior high-and-under set. In this episode, the kids of South Park learn that sniffing cat urine can get you high, resulting in a cosmic trip to a land populated by giant creatures and giant-breasted women. Other particularly funny episodes include The China Probrem, featuring Cartman and Butters visiting P.F. Chang’s to try to uncover the Chinese conspiracy to take over the U.S., as George Lucas and Steven Spielberg are accused by Stan and Kyle of raping Harrison Ford; Super Fun Time, which follows a class field trip to a frontier park, that turns into a hostage situation with a group of robbers attempting to evade the police, but the park employees won’t help resolve the situation because they won’t get out of character; and About Last Night…, an elaborate heist caper, where Obama’s presidency is revealed as a plot to steal the Hope Diamond.

Parker and Stone’s incredible wit is not lost on important topics of the day, yet they find a way to make viewers laugh at the very issues that affect us most. In this collection, the raucous show finds the boys keeping busy helping a pop-princess who’s down on her luck, negotiating a truce for striking Canadians, and preventing giant rodents from destroying the world. For them, it’s all part of growing up in South Park.

Special Features
The Mini-Audio Commentaries from Trey Parker and Matt Stone are back and are hilarious on each and every episode. There’s also a making-of featurette titled Six Days to South Park: A Day-by-Day Making of South Park that covers the creation of About Last Night, along with scenes peeks at both Major Boobage and About Last Night.

The Blu-ray presentation is stunning, highlighted by the bold colors from the show, popping sharply on screen. Fans of the show should definitely choose the Blu-ray version over the DVD.

The South Park Season 12 Blu-ray contains more than five hours of content. The presentation is in English, with subtitles. Audio options are 5.1 Dolby TrueHD, Dolby Digital and Stereo.

Here is a list of the episodes on the three disc set: