Disney’s classic Pinocchio is a walk back in time. While 3D technology has taken animation to new levels, watching a completely hand-drawn story, adds a certain depth, life and quirkiness to the medium. The studio’s second feature after Snow White, Pinocchio is amazingly complex and somewhat dark (for a kid’s film). 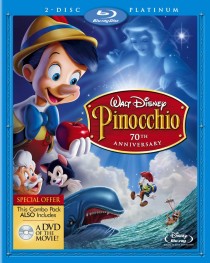 What’s so astonishing about this whimsical tale of loneliness, bravery, loyalty, honesty and hope, is the amazing world of mystery and wonder that it created. It’s the story of a carpenter/craftsman named Geppetto, who creates a wooden Marionette named Pinocchio. Gepetto lives a simple life, surrounded only by his wooden creations, a goldfish named Cleo and Figaro the cat. So one night he makes a wish that Pinocchio be made into a real boy, and so Pinocchio’s tale begins.

A magical fairy appears soon after Geppetto and his follow denizens have fallen asleep, and because of all the happiness Geppetto has given others, his wish to make Pinocchio real is granted – but of course things are never that easy are they. Pinocchio is given the opportunity to live life as a wooden puppet and if he makes the right choices, he’ll be transformed into a human child.

This isn’t as easy as it might seem, especially for a wooden puppet suddenly living in the real world. The fast-talking, wisecracking Jiminy Cricket becomes his sidekick, and helps Pinocchio along the way.

With universally loved music like the Academy Award winning original song When You Wish upon a Star, and a touching story, Pinocchio is a classic tale of magic, adventure and loyalty, and was a joy to experience in Hi-Def for the first time.

Special Features
Pinocchio is available for the first time in high-definition, and features a brilliant restoration with an ultra-crisp picture and incredible sound. The special features on the disc are worthy of their own release, as an interactive children’s game. They harness Disney’s ever-growing reach into multimedia and gaming, and leverage the possibilities of the Blu-ray format as well as, and maybe better, than any release I’ve come across thus far.

Disc one includes the movie itself, plus access to Cine-Explore: Disney BD-Live Network, which allows movie lovers and families can continue to stay connected and engage in the film further. Features on the network include:

Disc two features the majority of the disc-based special features. The set includes:

To celebrate the Blu-ray and DVD release of the Pinocchio 70th Anniversary Edition, we’ve received these great clips from the film.