In this tale of suspense, something evil lurks just beneath the surface of a teenaged girl’s private school world – and it’s ready to battle for her very soul. Molly Hartley is a troubled teen that’s misunderstood and depressed – a situation that befalls many teens going through that often difficult and confusing stage of life. As if that weren’t enough, her psychotic mother has been locked up for stabbing her in the chest, because she believes that her daughter is scheduled to join Satan’s army when she turns 18 (okay, so maybe her situation is a bit extreme compared to other teens).

Molly hopes that with her mother locked away in a mental ward, that she can forget the violence of her family’s past and start fresh. She has found a new life, a new school and a new boyfriend. But when her secret past and haunting nightmares continue, Molly fears she has inherited her mother’s psychosis. 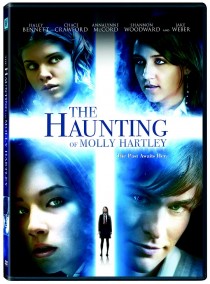 The Haunting of Molly Hartley has some nice touches, and Haley Bennett’s charisma is a bright spot as the title character. But in the end, ‘Molly Hartley’ turns out to be just another cliché horror film with supernatural elements. The movie does the job it’s intended to do, with some moments of true fright, along with some fun campy elements reminiscent of a few retro satanic delights. But the lack of an original storyline leaves a predictable, and oddly slow and plodding final product in its wake.

Bonus features on the disc include interviews with Haley Bennett, Shanna Collins, AnnaLynne McCord along with the director Mickey Liddell. The theatrical trailer is also added to the extras presentation.