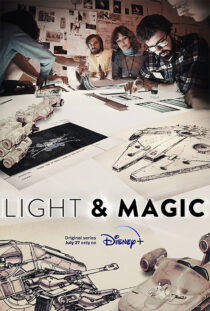 Disney is set to release a deep-dive documentary series on Industrial Light & Magic, the visual effects company that George Lucas originally founded to create the special effects for the Star Wars trilogy. Since then, the company has provided stunning visual effects from the Death Star trench run to the Terminator T-1000 morphing to the Avengers saving New York City. The magic of ILM will be explored in the new Disney+ documentary series Light & Magic.

Light & Magic centers on more than 40 years of history in practical and digital effects processes, along with the stories of the people who have worked at ILM. Vintage behind the scenes footage from Star Wars: A New Hope shows the filmmaking process for Lucas’ groundbreaking science fiction movie. The trailer also previews content from the Indiana Jones franchise, Marvel movies, Honey, I Shrunk the Kids, Who Framed Roger Rabbit, and Terminator 2: Judgment Day.