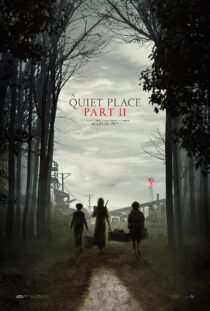 The directed A Quiet Place Part II, which was one of the first Hollywood studio film projects to have it’s release shelved due to the COVID-19 pandemic in 2020, will now be released in theaters on May 28th, 2021. An exclusive streaming premiere will follow 45 days after the theatrical release, on Paramount Plus.

John Krasinski, who co-wrote and directed the solid 2018 original monster flick, returns to the helm for the sequel. Krasinski’s real-life wife continues the fight against the sound-sensitive creatures since her husband sacrificed himself to protect his family in the first film.

A Quiet Place Part II will see the remaining Abbott family members forced to faced the terrors of the outside world. Venturing into the unknown, they realize the creatures that hunt by sound are not the only threats lurking beyond Earth’s ruins.

Like Godzilla vs. Kong, this is another one I’m really looking forward to. Not just because I thought the original film was a stout sci-fi horror. And not just because I’m a big fan of Emily Blunt. It’s mostly because very film a movie lover like me watches in cinemas these days, makes life feel a little more normal.