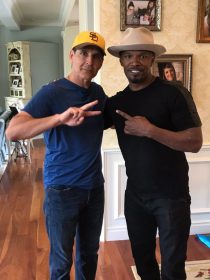 “There are five or six moments where I’m going to need things from my actors, and a couple of them have to come from Jamie, and I’ve seen him deliver them onscreen,” said McFarlane. “He gets into a zone, with body language and a look that basically will say way more than anything I could type on a piece of paper, and this movie is going to need those moments. And in the odd moment where he has to deliver a line that’s short, curt, and has impact, he can do it in a way that makes you go, ‘Whoa, I don’t want to mess with that guy. What a badass.’”

Spawn sold an unprecedented 1.7 million copies at the time it was released and is one of the world’s best-selling and longest-running monthly comic books, with hundreds of millions sold worldwide in more than 120 countries, and 15 different languages. The comic became an Emmy Award-winning animated series on HBO and a New Line Cinema feature film that grossed more than $100 million.