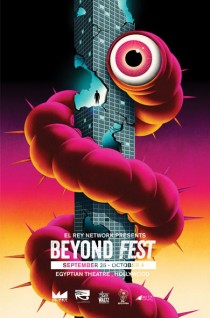 This year’s programming by creative collective Amity and the American Cinematheque offers more than 30 different programs, including an appearance by director John Carpenter and star Jamie Lee Curtis with their classic 1978 shocker Halloween. The new documentary My Life Directed by Nicolas Winding Refn screens with Refn’s Only God Forgives. A discussion follows with the directors of both films. The Meltdown With Josh and Kumail serves up The Monster Squad with director Fred Dekker in person. The Town That Dreaded Sundown is a sleepy little burg in Texarkana terrorized by a serial killer; Alfonso Gomez-Rejon’s horror reboot is one of several Los Angeles premieres. Dan Gilroy will be on hand to screen and talk about his directorial debut, Nightcrawler, while Snowpiercer creator Jean-Marc Rochette talks about turning his graphic novel into a dazzling big-screen vision of our dystopian future. Tetsuya Nakashima’s gritty The World of Kanako and Sion Sono’s blood-soaked Tokyo Tribe are both set in the Japanese underworld. The crime drama Hyena is set in London and screens for free in “The People’s Network Theatre,” a.k.a. The Spielberg Theatre, as does horror-comedy SHHHH and documentary Future Shock! The Story of 2000AD.

Tickets for the free screenings will be available the day of each show on a first come, first serve basis. Box Office opens 90 minutes before the first program of the day. No vouchers accepted for paid programs.

Check out the schedule below or find a more complete schedule and additional information Here.

Thurs, September 25th – 9:30 PM
The world’s greatest editor is reduced to cutting exploitation fare after he loses several fingers in an accident – and the finger of suspicion falls on him when actors in his latest film fall victim to a killer.

Friday, September 26th – 7:30 PM
Convinced that an evil presence remains in his house in Ireland, a film archivist begins investigating its history, only to find himself at the center of a series of horrifying events.

Saturday, September 27th – 5:00 PM
This sequel to the audacious horror-comedy anthology takes another trip through the alphabet, with one grisly death per letter, each visualized by a different director.
Discussion following with cast and crew.

Sunday, September 28th – 10:00 PM
A pleasure-seeking vampire arrives in Athens in 1984 to explore old haunts and discover new friends, but an elaborate conspiracy threatens to consume him and all that surrounds him. In Greek with English subtitles.

Monday, September 29th – 10:00 PM
Wednesday, October 1st – 10:00 PM
This doc tells one of the most jaw dropping stories of excess, madness and sheer bad luck in movie history – Richard Stanley’s journey to direct Marlon Brando and Val Kilmer in THE ISLAND OF DR. MOREAU.
Please note that the screening of HYENA that was originally announced for 10/1 has been cancelled, and an encore of LOST SOUL will screen in its place.

Tuesday, September 30th – 10:00 PM
When businessman Nao joins a mysterious club in which the dominatrices perform their sado-masochistic acts without warning and in public, his attempts to leave the club only escalate the abuse. In Japanese with English subtitles. Discussion following with actress Lindsay Kay Hayward.

Thurs, October 2nd – 9:30 PM
Harris and his mother love the movies but sometimes other audience members spoil things; when disruptive filmgoers start dropping like flies, Harris finds himself confronting his past and questioning his sanity.

Friday, October 3rd – 10:00 PM
This fascinating documentary charts the glories, failures and turbulent history behind acclaimed sci-fi comic 2000AD, a uniquely British property that has influenced everything from “Doctor Who” to Anthrax and Portishead.

THE WORLD OF KANAKO (KAWAKI)

Friday, October 3rd – 10:00 PM
After his teenage daughter goes missing, an ex-cop launches a search for the girl – and is shocked to discover that her secret life was far from her squeaky clean image as he delves deeper into the Japanese underworld. In Japanese with English subtitles.

THE TOWN THAT DREADED SUNDOWN