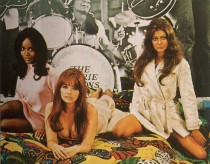 Deadline reports that Will Ferrell is in talks to play sexploitation film producer Russ Meyer in the indie film project Russ and Roger Go Beyond. The film centers on the collaboration between Meyer and iconic film reviewer Roger Ebert on the 1970 film Beyond the Valley of the Dolls, which Meyer directed from a script he co-wrote with Ebert.

Russ and Roger Go Beyond is written by Christopher Cluess, whose credits include Saturday Night Live and The Simpsons. The film centers on the relationship between Meyer and Ebert, who was starting out as a Chicago Sun-Times film critic when he agreed to write the script. Beyond the Valley of the Dolls, one of the few studio films to go out with an X rating, was released by 20th Century Fox and became incredibly profitable.

Russ Meyer passed away in 2004 at the age of 82, after a long career directing sexploitation films, including the cult classics Beneath the Valley of the Ultra-Vixens and Faster, Pussycat! Kill! Kill! Roger Ebert died in April of 2013.

Ferrell will soon appear in the Warner Bros. prison comedy Get Hard with Kevin Hart, expected to be released in March of 2015.

Check out the trailer for Beyond the Valley of the Dolls, below.