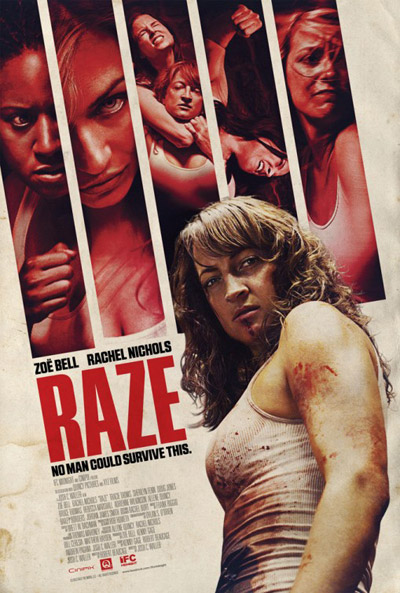 International action star Zoë Bell, who was discovered by Quentin Tarantino, will appear at the Museum of the Moving Image for a preview screening of her new action film Raze, on Tuesday, January 7, 2014. In this relentlessly hyperviolent action film directed by Josh Waller, she stars as a woman forced to do battle with other innocents for the amusement of unseen spectators. Leading up to this special screening and appearance, the Museum will present a retrospective of Zoë Bell’s work — chronicling her transformation from stuntwoman to star — featuring screenings of the films Whip It, Death Proof and Kill Bill: Vol. 1 and Kill Bill: Vol. 2, on January 4th and 5th, 2014.

A New Zealand native, Zoë Bell started out as a gymnast and martial artist who worked as Lucy Lawless’s stunt double in Xena: Warrior Princess. She was featured in the 2004 documentary Double Dare, about stuntwomen, a film that drew the attention of Quentin Tarantino and helped her land a role as Uma Thurman’s stunt double in the Kill Bill films. Working on these films, Bell’s days consisted of sword fights, body burns, karate, and all-out pugilism. She quickly became one of the most sought after stunt performers in Hollywood (appearing in Catwoman, Poseidon, and The Kingdom). With Tarantino’s 2007 film, Death Proof, Bell played herself, in a role that showcased her amazing physicality and her instinctive acting ability. Drew Barrymore, in her 2009 directorial debut Whip It, likewise tapped Bell to play a veteran roller derby player who mentors newcomer Ellen Page.

Raze stars Zoë Bell, Rachel Nichols, Tracie Thoms, Sherilyn Fenn, Doug Jones, Bruce Thomas, Bailey Anne Borders, Rebecca Marshall, Adrienne Wilkinson, Rosario Dawson and Allene Quincy. In the film, Bell plays a young woman who is abducted by an elite, secret society and awakens to find herself in the company of fifty other women who are, like her, forced to fight for their lives in an unimaginable hell.

Below is the screening and event schedule for “Zoë Bell: From Stuntwoman to Star” at the Museum of the Moving Image.

The Museum of the Moving Image is located at 36-01 35th Avenue, Astoria Queens, New York Click Here for additional information on “Zoë Bell: From Stuntwoman to Star.”