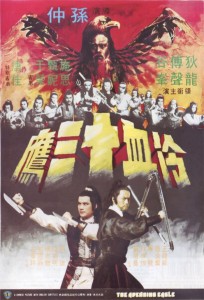 Variety reports that the Weinstein Co. has signed a two-picture deal with Celestial Pictures to remake a pair of classic martial arts action films from the Golden Era of Hong Kong cinema. Weinstein and Celestial will develop and produce English-language versions of Come Drink With Me and Avenging Eagle, according to the report.

John Fusco, Marco Polo TV series writer and co-scripter of the upcoming Crouching Tiger Hidden Dragon II: The Green Destiny, will write both adapted screenplays. Production on both is expected to start in 2014 with Harvey Weinstein and David Thwaites set as producers. Hong Kong-based Celestial Pictures was established in 2002 to manage the 760 film library of Shaw Bros. It is controlled by Malaysian media conglomerate Astro Overseas.

The Weinstein Co. has been distributing a number of Shaw Bros. titles since Celestial began restoring, remastering and relicensing its back catalog. TWC has held the remake rights to both films since 2006, but hasn’t moved much on development until recently. Celestial says it’s in similar discussions with other top U.S. producers for remakes of other Shaw titles as well.

TWC will be the lead creative partner, however Celestial will be involved throughout development and production and retain an undefined back-end participation.

Originally directed by King Hu and released in 1966, Come Drink With Me centers on an against-the-odds-fight by a female martial arts expert and a kung fu master disguised as a beggar, who takes on a band of outlaws that have taken a young official prisoner. It was the model for numerous other “wu xia pian” or heroic martial arts films, and the springboard to fame for Cheng Pei Pei, who later reprised a similar role in Ang Lee’s 2000 wu xia tribute Crouching Tiger, Hidden Dragon.

The 1978 Sun Chung-directed thriller Avenging Eagle focuses on a cabal leader who’s raising orphans to be his own personal thugs in an outlaw band called the Thirteen Eagles. One of the orphans rebels, leading to the rest of the gang to hunt him down.