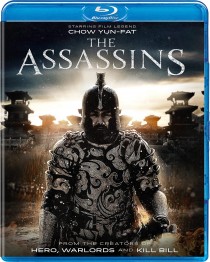 Well Go USA Entertainment just debuted iconic action hero Chow Yun-Fat’s latest action-adventure The Assassins on Blu-ray, DVD and Digital on January 8th. To celebrate the release of what’s being described as Yun-Fat’s most demanding role yet in Director Linshan Zhao’s thriller, FilmFetish is giving away three copies of the Blu-ray edition of The Assassins.

I’ll only be running this contest through March 1, 2013, so hurry and submit your Tweets!

More about The Assassins

During the Three Kingdoms period, Cao Cao stands as the last pillar of power preventing the collapse of the Han throne. Emperor Xian, who sits on that throne, cares more about music and poems than his own power. But behind the Emperor’s disinterest, rumors that Cao Cao wants the throne for himself have driven Emperor Xian to plot Cao Cao’s assassination, a plan that’s been years in the making. An ancient prophecy states that when the four elemental start to align, a new dynasty will arise, and in 221 A.D., they do. With the weakened government and impending omen, Cao Cao has enemies everywhere, and they all want him dead. Someone has been abducting the children of Cao Cao’s dead enemies and training them to be assassins. In 221, they are grown, and sent to infiltrate Bronze Sparrow Tower. When the four stars align over Bronze Sparrow Tower, the struggle for Cao Cao’s life begins …

Bonus features include a Behind the Scenes Featurette and the Trailer for The Assassins.

Check out the trailer and images from The Assassins, below.