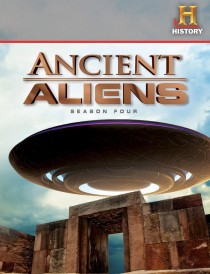 Last week, The History Channel released the fourth season of the hit alien investigative show Ancient Aliens, on DVD and Blu-ray. To celebrate the release of Ancient Aliens: Season Four, FilmFetish is giving away 3 copies of the Blu-ray edition, to readers.

In order to be entered into the Ancient Aliens: Season Four random drawing:

Ancient alien theorists like Erich von Däniken, author of “Chariots of the Gods” believe that, thousands of years ago, extraterrestrials landed on Earth, where they were hailed as gods and helped shape human civilization. But what proof could possibly exist for such an encounter?

Ancient Aliens, one of the top-rated programs on HISTORY® and home entertainment best-sellers, continues to examine 75 million years of the most credible alien evidence here on earth, seeking proof that intelligent life forms affected the course of history and man’s own development. In Ancient Aliens: Season Four, being released on blu-ray and DVD, the hunt continues through myriad thought-provoking topics and in-depth examinations into controversial theories such as the Mayan conspiracy, the Doomsday Prophesies, and the Da Vinci conspiracy.