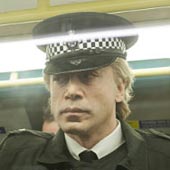 The Skyfall movie release is just around the corner, on November 9, 2012, but the 50th Anniversary celebration of James Bond has been fast and furious all year. To whet our appetites for the Sam Mendes-directed next installment in the long-running action franchise, Columbia Pictures has release a new series of images from the film, featuring Javier Bardem’s villain Raoul Silva, along with new Bond girls Naomie Harris as Eve & Bérénice Marlohe as Sévérine.

Check out the new images from Skyfall, below.