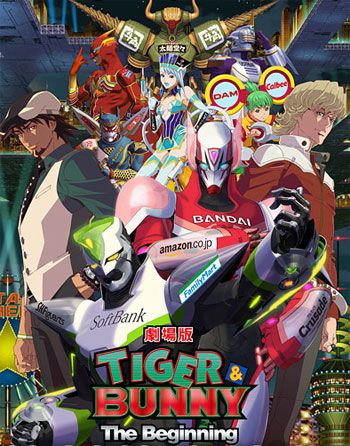 Artist Masakazu Katsura is in charge of character creation and hero designs for the anime series Tiger & Bunny. Beyond his work as a character designer, Katsura is a well-recognized manga creator who won an honorable mention in the 19th Tezuka Awards for his debut manga Tsubasa in 1980. In 1983, he began serializing Wingman in Weekly Shonen Jump. Wingman became a major hit and was also turned into an animated series. Afterwards, he created the hits Video Girl Ai, DNA, I’s, Shadow Lady, M and others in Weekly Shonen Jump. He is presently serializing his science fiction action manga Zetman in Weekly Young Jump.

Tiger & Bunny, produced by Sunrise Inc. in Japan and released by VIZ Media in the U.S., is set in Stern Bild, a metropolitan city where superheroes called Next help to maintain peace. Sporting sponsor logos on their suits, these heroes work to solve cases and save people’s lives in order to earn Hero Points, while also helping to improve the public image of their corporate sponsors. One such hero is Kotetsu T. Kaburagi, a veteran superhero named the “Wild Tiger” who relies on his years of experience and instincts to fight crime. Now, Kotetsu suddenly finds himself forced to team up with rookie hero Barnaby Brooks Jr., soon nicknamed “Bunny”.

See all of our coverage for this year’s New York Comic-Con RIGHT HERE.