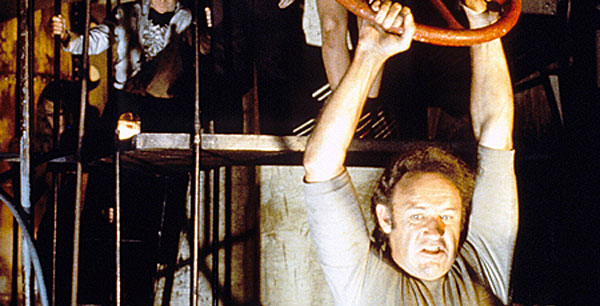 This Friday and Saturday, April 26th and April 27th, The Loew’s Jersey will remember the 100th anniversary of the sinking of the Titanic with three classic sea disaster film screenings, including Alfred Hitchcock’s 1944 Lifeboat, director Roy Ward Baker’s 1958 Titanic dramatization A Night To Remember, and director Ronald Neame’s 1972 action adventure The Poseidon Adventure. Check out the schedule below for complete details on the weekend screening event.

Lifeboat was a film ahead of its time. The film took place in the Atlantic Ocean during World War II, after a ship and a German U-boat are involved in a battle and both are sunk. The survivors from the ship gather in one of the lifeboats. They have a variety of backgrounds, including: the radio operator, an international journalist, a rich businessman, a nurse, a steward, a sailor and a communist engineer. Trouble starts when they pull a man out of the water who turns out to be from the U-boat. According to trivia, Lifeboat screenwriter John Steinbeck, a noted liberal, was outraged by what he regarded as director Alfred Hitchcock’s racism as manifested in Hitchcock’s demeaning towards actor Canada Lee, a trailblazing African American actor at the time.

A Night To Remember is described as a reasonably accurate account of the sinking on April 14, 1912 of the RMS Titanic, the luxury ocean liner that struck an iceberg in the North Atlantic on its maiden voyage. The ship was the height of luxury and widely reputed to be unsinkable. The film focuses mostly on the ship itself and the issues faced by Captain Smith, his crew and the passengers. The ship carried only enough lifeboats for half of the passengers and crew but even at that little more than a third of the them survived. A Night To Remember also recounts the activity on the Carpathia, which sailed to the survivors rescue, and the California, which failed to recognize their distress signal.

This 40th anniversary screening of The Poseidon Adventure is co-sponsored by Cinema Retro Magazine and will use 20th Century Fox’s vault print. Noted film critic Stephen Whitty will host the screening and be joined by David Savage of Cinema Retro, Poseidon expert Chris Poggiali and critic Matt Forke to share trivia and insights about the film and its production.

Check out scenes and trailers from the films, below.

A Night To Remember (extended trailer)