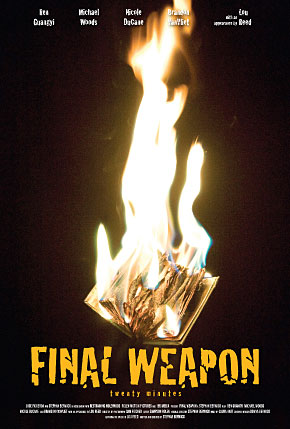 On Tuesday, April 10th, the martial arts movie Final Weapon, starring Chen Taijiquan, Grand Master Ren Guang Yi, and Hong Kong action star Mike Woods, with a special appearance by Rock and Roll legend Lou Reed, will be one of a group of martial arts action films to screen during the New Flimmakers Festival. Final Weapon is writer, directed and produced by Stephan Berwick and features martial arts choreography by Jose Figueroa, also a co-producer on the project.

Final Weapon takes viewers through the fast-moving odyssey of an aging warrior confronted with a fatal choice at what may be his last battle, set against the backdrop of vintage Lou Reed music. Reed appears in the film as The Holder of the “final weapon’s” secret verse, passing it on to Holder 1, played by famed Tajiquan master, Ren Guangyi. Co-starring is Michael Woods, one of Hong Kong’s most beloved film nemeses from the 1980s through the early 1990s, the action drama is about holding, passing, using and protecting an ancient form of martial arts.

Other shorts screening during the same program, include Nick Twemlow’s The Laying on of Hands, Bryan Felber’s University of the Streets, and Linette Lucas’ Friend & Foe.

The screening begins at 8pm at the Anthology Film Archives, located at 32 Second Avenue in New York City.

Find out more about this event at RIGHT HERE.

Find out more about the New Filmmaker series at newfilmmakers.com.