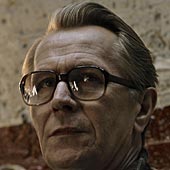 Things aren’t always as they seem in the Oscar-nominated, suspenseful, and stylish thriller from director Tomas Alfredson (Let the Right One In), based on the classic novel by John le Carré. Focus Features’ Tinker Tailor Soldier Spy will be available on Blu-ray Combo Pack with UltraViolet, on DVD,on Digital Download and On-Demand March 20, 2012, from Universal Studios Home Entertainment. At the height of the Cold War, Britain’s Secret Intelligence Service (SIS), a.k.a. MI6 and code-named the Circus, has been compromised. An ever-watchful former top lieutenant and career spy, George Smiley (Gary Oldman, The Dark Knight, Harry Potter and the Order of the Phoenix), is called out of retirement by the government to help identify and track a suspected mole at the top of the agency. The list of suspects is narrowed to five men. Even before the startling truth is revealed, the emotional and physical tolls on the players enmeshed in the deadly international spy game will escalate…Tinker Tailor Soldier Spy is Academy Award-nominated for Best Actor (Gary Oldman), Best Adapted Screenplay (Bridget O’Connor and Peter Straughan), and Best Original Score (Alberto Iglesias); and is nominated for 11 BAFTA Awards including Best Film and Best Actor.

Included with the Blu-ray Combo Pack is an all-new UltraViolet copy of the film. UltraViolet is the revolutionary new way for consumers to collect movies and TV shows, put them in the cloud and download and stream instantly to computers, tablets and smartphones and soon, consumers can download to devices of their choice too. The Tinker Tailor Soldier Spy Blu-ray Combo Pack also includes a Digital Copy of the film which is compatible with iTunes, iPad, iPhone, iPod touch, Android or other retail partners.

Below is a gallery of images from Tinker Tailor Soldier Spy.