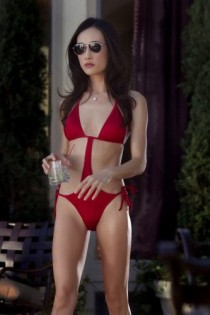 The Nikita panel at the 2010 edition of New York Comic-Con was one of my favorites. It wasn’t over-crowded, great questions… and Maggie Q. When I first started posting what I feel are going to be the best events for this year’s event, the Nikita crew wasn’t listed. However, upon browsing the schedule today, I found that there will indeed be a panel for Maggie Q and her special ops unit of partners.

Nikita returns to NYCC for 2011 with series stars Maggie Q (Mission: Impossible 3), Shane West (ER) and Lyndsy Fonseca (Kick-Ass), who will joined this year by producer Albert Kim, where they will reveal classified video and information on the TV show. For those who haven’t caught up, the second television season of the show finds Nikita and Michael on the run with a black box containing the government’s, and Division’s, darkest secrets. Leading the hunt for them is Alex – yes Nikita’s former inside gal – and she knows all of Nikita’s tricks. From Wonderland Sound & Vision and Warner Bros. Television, Nikita now airs Fridays at 8pm Eastern and 7 Central on The CW.

In season one of this sexy and suspenseful series featuring international action star Maggie Q in the title role, the charming and deadly Nikita waged a war against Division, the agency that created her. Michael – the man who trained her, a man she trusted – was hunting her. But Nikita had an ace up her sleeve: Alex, a girl she trained to infiltrate this secret unit of the government. At the end of season one, Nikita and Alex’s relationship had been shattered, and Nikita and Michael’s relationship was restored. Now, Nikita and Michael are on the run with a hard drive containing the government’s darkest secrets and conspiracies. Together, they are going to right the wrongs that Division has committed over the years, one mission at a time. But leading the hunt for them this time is Alex…and she knows all of Nikita’s tricks.