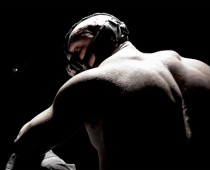 SuperHeroHype reports that the trailers for The Dark Knight Rises and Sherlock Holmes: A Game of Shadows will arrive in front of Harry Potter and the Deathly Hallows: Part 2 next week, meaning they’ll both be online by Wednesday or Thursday. Reportedly, the trailer for Happy Feet Two will also come attached to Harry Potter, for the kid-friendly crowd. The trailer for The Dark Knight Rises is a minute and a half.