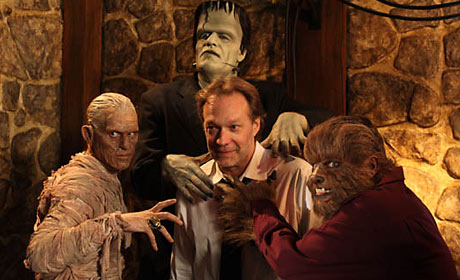 Today AMC revealed a short film from special affects maestro Greg Nicotero, co-founder of KNB Studios and the monster maker behind AMC’s upcoming The Walking Dead adaptation. The short if a faux promo shot as a historical newsreel promoting a fictional talent agency, featuring all the famous Universal Monsters, with guest appearances by actors and directors including as Eli Roth (Hostel), Dana Gould (The Simpsons), Robert Rodriguez (Machete), and Walking Dead’s own Frank Darabont as the Director. It is obviously a work of love by a man inspired by the creatures of Hollywood’s golden era on monsters.

Check out the fun short film below.