Written and directed by Patrick Hughes, Red Hill centers on young police officer Shane Cooper (True Blood’s Ryan Kwanten) relocates to the small country town of Red Hill with his pregnant wife Alice to start a family. But when news of a prison break sends the local law enforcement officers – led by the town’s ruling presence, Old Bill – into a panic, Shane’s first day on duty rapidly turns into a nightmare. Enter Jimmy Conway, a convicted murderer serving life behind bars, who has returned to the isolated outpost seeking revenge. Now caught in the middle of what will become a terrifying and bloody confrontation, Shane will be forced to take the law into his own hands if he is to survive.

A taut thriller which unfolds over the course of a single day and night, and told with explosive action and chilling violence, Red Hill is a modern-day western played out against the extraordinary landscapes of high-country Australia.

Check out a larger version of the poster below by clicking on the image.

CLICK HERE to watch the trailer, or view it below.

Find out more about Red Hill at redhillmovie.com. 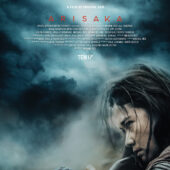