Smith Micro Software today announced that they’re bringing Watchmen artist Dave Gibbons to fans at 2010 Comic-Con International in San Diego. The acclaimed co-creator of the Watchmen comic and film will greet fans at booth #5238 for exclusive signings. Plus Comic-Con attendees can enter now via Twitter for the chance to attend an exclusive dinner engagement in San Diego with Gibbons on Saturday, July 24th, 2010.

Gibbons, who has worked in comics since 1973, now creates his characters and storylines using Smith Micro’s Manga Studio software, and he has used the software to design an all-new, limited edition poster created exclusively for Comic-Con 2010 attendees.

Enter to Win “Dinner with Dave” via Twitter. The exclusive dinner engagement will take place at 8:00 PM on Saturday, July 24, 2010. All Comic-Con attendees are eligible to enter, and winners are allowed to bring one guest.

To enter the contest, visit twitter.com/mangastudio and retweet any of the tweets that include #SDCC_DaveGibbons, and you’ll be automatically entered to win. Winners will be notified of the location by July 19th. Contest is only open to 2010 Comic-Con International attendees.

Below are the times for the limited edition poster and booth signings:

Check out an exclusive sketch of Dave Gibbons’ Watchmen Comic-Con 2010 poster. The final version won’t be released until Preview Night of the Con. 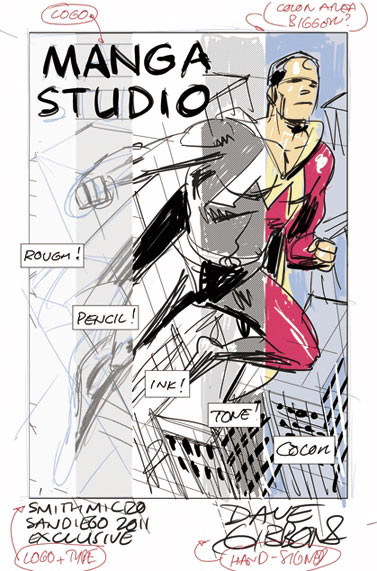