American Son tells the surprisingly compelling story of 19-year-old Marine Mike Holland (Nick Cannon), who has just completed basic training at Camp Pendleton and is headed home to Bakersfield for a four-day Thanksgiving leave with his family and best friends. What Holland is reluctant to reveal to anyone, is that he’s headed for his first tour of Iraq when he returns. Cannon is amazing as the young lost soul, whose entire being is about to be turned upside down, who’s trying to find ways to avoid reality, relive his youth and get lost in the moment. He finds comfort in his flirtation with a girl name Cristina (Melonie Diaz) on the bus ride home and completely fills his mind with thoughts of seeing her, extinguishing any thought of the precarious future that lies ahead of him. 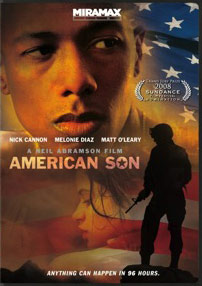 American Son is a somber drama that never loses sight of its main subject, even with the many personal hurdles that Holland must face in order to bring closure to his past, including a struggling family that’s losing its center, as well as an older brother and best friend (Matt O’Leary), both of whom are sliding deeper into the local drug culture. Not only will those in the military and their families identify with this film, but anyone who’s left a difficult upbringing, and headed for what they anticipated to be a better life, only to find a different kind of hardship. What was refreshing about American Son is that it didn’t dive into the politics of war and ask the viewer to take sides; it instead casts a spotlight on those fighting, and those left behind.

As Mike tries to reconnect with his mother (April Grace), stepfather (Tom Sizemore) and sister (Erica Gluck), he soon realizes that he must let go of his troubled friend, face up to what is in front of him, and let his family know where he’s going. American Son ends up being a sad and revealing story, that’s told in the span of 96 hours. At times moving, at other times, somewhat boring. But it has a resonating message and a realistic originality that holds steady throughout.